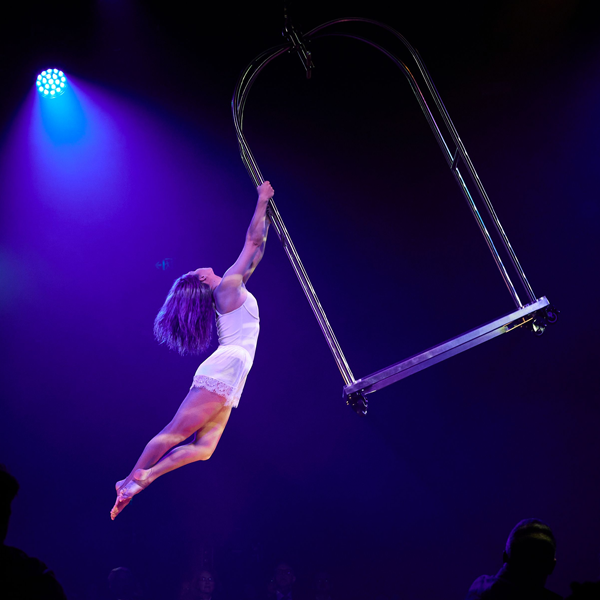 Was ever the Space Theatre a more sumptuously luscious venue?

As conceived by Craig Ilott and Stuart Couzens, the Space has been transformed into a romantically lamp-lit realm of intimate tables occupied by an audience out in their finery. It’s a black tie do. After seeing people in Ts and sneakers turning up for major theatre openings in the past, it is something of a pleasure in itself to be among a crowd of the elegantly attired. So, there is a sense of occasion.

And, what an occasion.

It is a case of “expect the unexpected”. And expect it to be of five star production standards on every level.

French-speaking waiters attend one’s table, pouring French champagne and serving a platter of decadent French cheeses between performances of arresting Pina Bausch-esque dance routines.  Our lithe and handsome young waiter is Olivier Nilsson. Like the others, he is a genuine actor but, unlike most of the cast, he is perhaps not so much an acrobat as just a figure of attentive charm.

For the first thirty minutes or so, the audience settles in drinking champers and enjoying cheese, listening to French music, watching the wait staff’s periodic routines, observing the gradual arrival of L’Hotel’s guests who, after being greeted by the concierge onstage, drift off to assigned rooms. The balcony becomes the L’Hotel’s upstairs corridor along which bellboys run errands and housekeepers push their cleaning wagons and dust and polish the railings, pausing to join the dance routines.

Prompt side downstairs is a stage for singers. OP is a bathtub being steadily filled with water. Begowned women come to and fro attending to it.  Meanwhile, in the heart of The Space is a platform groaning with buckets of champagne and arrays of flowers and cheeses in a display of opulent decadence.

A French chanteuse arrives and the official performance begins: Caroline Nin singing in French and introducing another table treat.  Eclairs. Oh, they are delicious, as is she. Table lamps are removed and a total blackout presages show time.

Thereafter it is one awe-inspiring routine after another, all rather on the sensual side. Bri Emrich and Lexi Strumolo take off their dressing gowns and share the bathroom in a glory of athletic femme sensuality. A luggage trolley takes centre stage to become suspended as a shining cage in which, clad in a prettiness of lingerie, Russian acrobat Masha Terentieva spins and bends and hangs and contorts with breathtaking skill and grace.

The luggage trolley is replaced by a stripper’s pole as the Concierge leaps onto his reception desk and with sublime nonchalance begins to peel off his uniform, revealing an erotica of burlesque lingerie and, all-of-a-sudden stiletto shoes so vertiginous that even Cher might quake. His physique is imposing and muscular but he is light and limber on the pole.

The sense of wonderment drifts into sorrow when Leah Shelton as an awkward masked and begowned character totters to the stage, gradually removing layers of latex ending, at last, with the pouted red cavern of her fake mouth. She is the symbol of loneliness, of sexual secrecy in impersonal hotel rooms, the sad, used sex doll. Her performance is utterly gripping and deeply heart-wrenching.

Throughout the show, Brendan Maclean has been darting around as a deliciously devilish bellhop with a finger in every pie. Now he comes to the piano and in his powerfully beautiful voice, sings People I’ve Been Sad while exquisitely androgynous Beau Sargent sparkles aloft in the sweetest of aerial acts adding a dash of naughty dance just for fun.

And it is a room full of swoon.

The audience is in no hurry to leave. It is sated and happy.

With travel off the menu, this exotic and mysterious French hotel has come to us; room service par excellence.

This immersive show will shine forth as the jewel in the crown of the 2021 Cabaret Festival program.