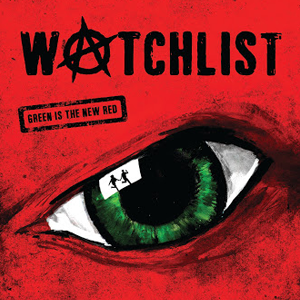 We watch avidly the rise and rise of Alex Vickery-Howe as an Australian playwright of substance. His latest work, Watchlist, has been lurking under covers of Covid to at last be revealed as a thrill of living theatre. This is a brave, bold, agit-prop piece. It is a didacticism-enabler. It is a work of passionate, acerbic, satiric prose.

Of all things to adore in this finely-produced play, foremost is the quality of writing, the turns of phrase, the power and beauty of the mind behind it, and the wit.  Diabolical one-liners pepper the script.

The play’s subtitle, “Green is the New Red”, is a shortcut to the eco-terrorism message it conveys. The plot devolves around young Basil Pepper, a bit of a loser in a world seemingly of smarter people. His mother, Marie, doesn’t hesitate to put him in his place, which, following his father’s funeral, is to live anywhere but with her. He moves in with an old friend called Roger the Knob, something of a bourgeois poseur swanning around in an oriental dressing gown. Roger sees himself as a role model and is jealous and aghast when Basil falls in with dangerous Delia, a seductive activist. Conservative Basil’s beliefs soon are deflowered and he becomes imbued with the urge to change the squalid values of this world of philistines who slaughter hapless animals in the name of a hamburger.

Around these characters skulk the shady watchers, the snooping authorities who represent the ruling world of carnivorous capitalism. They come in guises, but principally depicted as Normal Gould from ASIO who, in time-switchism throughout the play, is holding Basil accountable. There is further intrigue and unlikely layers to the plot but, principally this is a play of thoughts - big, disturbing, important thoughts, thoughts for a world destroying itself with greed and short-sighted priorities, with perversity and blithe hypocrisy. Emblematic is the thylacine and, screened on the backdrop in grainy black and white footage, is Benjamin, the last survivor of that doomed species. He is the totem of extinction rebellion. "How far would you go to save the world?", asks the play.

It all sounds rather over-earnest and evangelistic, but Vickery-Howe allows all sides to have their say and, most importantly, polishes them with satire. The play races along, albeit that it struggles slightly to find its ending.

The dark cavern of the Bakehouse Theatre is a perfect place for this production which is very smoothly directed by Lisa Harper Campbell. Scenes change swiftly and easily on an odd set which consists of a coiling trail of pine mulch over and around which the actors deftly tread and move props. Lighting and sound synchronise so well as to be unobtrusive, just part of the flow of cleverness.

As for the actors, they are word-perfect in a demanding script with each artfully defining their given characters. There is not much to criticise. Gianluca Noble, Katie O’Reilly, Katherine Sortini and Matt Hawkins. They are good. It is good. And Eddie Morrison as Roger can be really very funny.