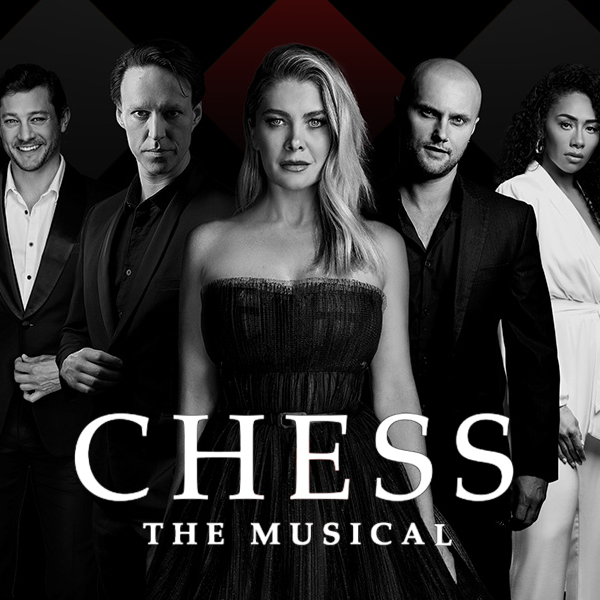 StoreyBoard Entertainment. Her Majesty’s Theatre. 28 May 2021

It would be hard to fit more people on the stage. In this touring semi-staged version of Chess the Musical, in lieu of trucks of traditional sets, the production is performed on a raised chess board flanked by a 40-strong Elder Conservatorium choir and 25 members of the Southern Cross Symphony Orchestra.

Indeed, this production may be described as more of an aural spectacular, the orchestra rich deep, light and bright, pulsing forth the irrepressible Abba beats of Benny Anderson and Bjorn Ulvaeus with the choir underlaying the singers with a magical depth of mighty sound.

As another test of the strengths of the new Her Majesty’s, it is a soaring success.

The storyline, elicited by Tim Rice’s 1980s book and lyrics, follows the fates of the Russia versus USA chess champions through political intrigue, commercial exploitation, and heartrending love. And, of course, the musical features some of the great show tunes the world has come to know and love: One Night in Bangkok, I Know Him So Well and You and I.

Clad in Dan Barber’s gorgeously tailored black and white costumes, the dance corps colours the stage with vitality, poetry, and emphasis, just beautifully choreographed by Freya List. The music is spirited and evocative, foot tapping and dramatic, and the dancers’ really make it so as very busily indeed they reflect the cultural traditions of chess-competition locations Italy and Thailand, and the nations of the two rival players.

Natalie Bassingthwaighte carries much of the emotional weight of the show as the American love interest, Florence Vassey. Her vocal power and stamina are well honed and she harmonises delightfully with Paulini when it comes to I Know Him So Well. Paulini is heralded as a rising star on the Australian musical stage and she proves it with bells on in this role as Svetlana, bringing the audience to a state of bliss as she sings Someone Else’s Story.

As directed by Tyran Parke, her errant Russian chess master husband Anatoly is given a deeply moody, smouldering presence by the splendid tenor Alexander Lewis. It is a complex role as core to the dramatic pressures of both heart and state in this politically fraught love story. But, of all the power players on the stage, it is Eddie Muliaumaseali’i as the manipulative Russian chess lord, Molokov, who possesses the musical muscle with his huge, beautiful baritone-to-bass range. Swoon.

The characters move hither and thither on the stage chessboard, pawns and rooks in the games of life and politics, Rob Mills is on steely charm offensive as the symbol of crass commercialism and Brittanie Shipway is crystal clear as the voice of the Arbiter.  Mark Furze, braves the role of the boorish American loser, Trumper, with the rich tenor tones of a musical-theatre voice.

There was no standing ovation from the full house at Her Maj on Friday night, but an audience clearly happy at a big-scale show with all that solid choral and orchestral sound under David Piper’s baton.