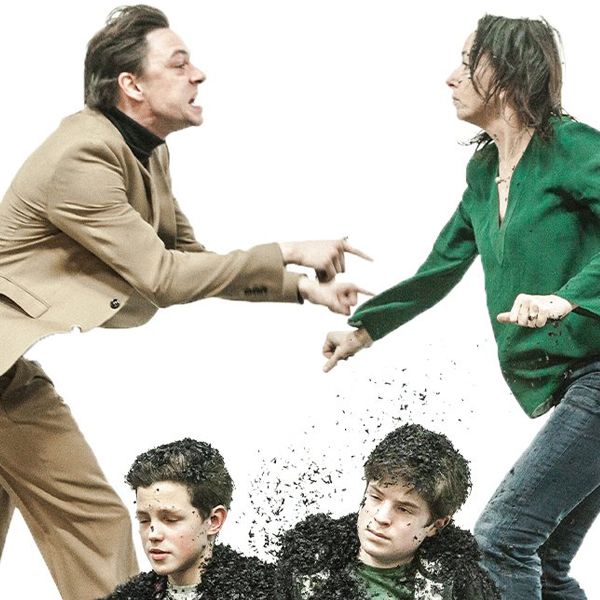 The Festival’s cross-global presentation of Simon Stone’s Medea begins late following some audio transmission noises explained by Festival co-director Neil Armfield as synchronisation tests from the Netherlands. Then, upon the huge screen covering the Her Maj stage, there are some positive words from Wouter van Ransbeek, the creative director of International Theatre Amsterdam who gives thanks to Australia for providing the world with the genius theatre-maker Simon Stone, creator of this reworking of the Euripides classic. The camera pans the empty seats of the theatre in which the production is being performed and we see the cast waiting on a big bare stage. “Where is the audience,” asks Armfield. Oh, yes. Amsterdam is still in lockdown, unlike here in Adelaide where a huge audience sits masked and expectant.

And so begins the performance you have when you can’t have a performance.

It is set, actors almost stranded, upon a vast expanse of white stage surrounded by white scrim and occasionally enhanced by a big screen descending upon the big screen. While the figures of the actors are far away in this Bob Cousins design, the video work brings their faces into huge and intense close-ups and one realises that this is an almost impertinently new-age techno take on an ancient Greek tragedy. It was first performed in 431BC.

Stone has re-envisioned the story of a mother’s cruel revenge, basing it upon a twentieth-century counterpart, the case of American doctor Debora Green, who killed her unfaithful medico husband along with their two hapless children in 1951.

Here we have Anna, the successful medical researcher who is betrayed not only by her perfidious husband but also by the man for whom they both work. He has elevated the husband, Lucas, whose affair is actually with his daughter, Clara. Anna has been released from hospital following an earlier breakdown in which she tried to poison Lucas. Now they are reunited and she tries desperately to recover lost ground, to entreat and seduce him back. Their children, making a documentary, it seems, film their intimacy. Clara finds out and reclaims Lucas. And the world starts to crumble symbolically, in shards of black paper “ash” streaming steadily down onto the stage until they resemble a pile of charred autumn leaves. And the white stage also becomes besmirched with Anna’s blood as her flailing desperation escalates. The black “ash” becomes a thing of play and a thing of morbidity and it spreads over the characters and the stage like grotesque black dandruff.

And one realises that in this ghastly tale, there is little room for sympathy towards anyone except the riven children. Lucas has carved a career taking credit for Anna’s achievements and Anna, ostracised and held in contempt, is drowning in a sea of spiteful despair that not even mother love can salve. We all know the ending.

The performances are superb. Ever has this company wowed us with its skills. And here they are amplified with massive close-ups, almost to the pores of their skin. There is no place to fudge a performance. It is live, immediate, and pure. Marieke Heebink, in jeans and stilettos, gives an award-worthy portrayal of poor, despairing Anna with Aus Greidanus jr. every bit exemplifying the weak, self-interested, and false-hearted husband.   Eva Heijnen is very persuasive as the opportunistic Clara who has stolen Anna's world and Bart Slegers stands strong as her father Christopher. The cast is ably completed by Alexander Elmecky, Joy Delima, Titus Theunissen, and Sonny van Utteren beneath an eerie and ominous soundscape from Stefan Gregory.

The downside is in the subtitling which, at the bottom of the screen against a white stage with smatterings of black, requires intense concentration. Lines spoken in Dutch cascade from the actors and it is hard to keep up. Occasionally, laughter from the stalls make one wonder, in the dress circle, what one might have missed.

In this revivification of Euripidean tragedy, Simon Stone certainly has pierced straight to the old core of universality. Treachery, betrayal, and the gaslighting of women remain ubiquitous. Rarely do they end quite so lethally, but the law courts are full of cases and the world remains full of those who live with the scars. Then is now. Only the telling and the technology has changed.

Where: Streamed live from International Theatre Amsterdam to Her Majesty’s Theatre