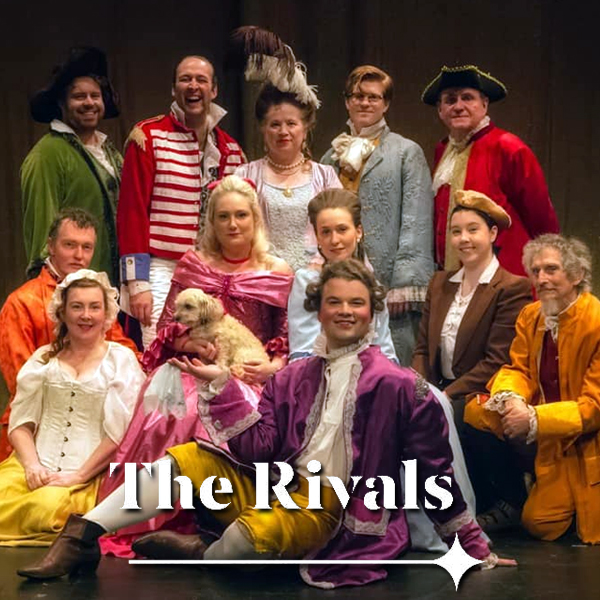 It seems the old Rep is old no more.

Throughout the lockup, The Rep bravely experimented in online productions, including a really delightful series of staged radio plays. Now with its first live audiences limited to only 54 and carefully covid-distanced, it has re-opened the doors of the Arts Theatre with a very old play and given it a whoosh of youthful vigour.

It is a humble, very low budget scratch production which is offbeat for a Sheridan period piece. Those old post-Restoration comedies of manners usually have flamboyant costumes and lavish sets. Here, there is just a plain curtain and a door with the players carrying chairs, sofas, and assorted set pieces on and off stage. Even the costumes are a bit all over the place, albeit they are colourful and suggestive of the characters. If there is to be a big tick in the appearance department, it goes to Annie Smith, the production hair stylist. In some ways she is star of the show. The women, uniformly, have aptly fanciful period hair styles with Mrs Malaprop as piece de resistance, especially when she appears with, of all things, a model yacht as a jaunty fascinator.

The Rivals is a beloved old Richard Brinsley Sheridan play, much performed since it first hit the stage the 1700s and much celebrated for its creation of the aforementioned character, Mrs Malaprop, whence comes the word “malapropism” for her incessant use of just the wrong word. Since she prattles this deceptively sensible nonsense, she is a demanding character to portray and The Rep did well in casting Kate Anolak who carries off with glorious authority the woman’s torrents of pretentiously almost-eloquent banter.

There are many delicious performances in this production directed by Matthew Chapman. Standout is Guy Henderson as Acres, a well delivered and refreshingly comic portrayal. He’s a joy to watch. A dandy dandy! Patrick Clements, also, delivers some lovely reactive comic moments in the ambivalent romantic lead as Sir Anthony Absolute. Don O’Donnell as poor Faulkland, the other romantic protagonist, has an earnest studiousness about him and a good stage presence in his quest for the heart of the lovely Julie. As sweet Julie, Emily Currie provides a strong and agreeable characterisation and a good, well-modulated voice. Alison Sharber, complete with gorgeous tiny poodle, utterly smothers the stage in glamour as Lydia Languish while the inimitable Matt Houston makes the complete contrast as the oddball rustic, Sir Lucious O’Trigger. Lindsay Dunn gives Sir Anthony Absolute a sense of perplexed earnestness and, indeed, the play’s cast is generally a pretty well-honed machine against the odds of no budget and minimal preparation time. It is colourfully completed by Jess Wolfendale, Rebecca Kemp, Philip Lineton, and AJ Bartley.

Director Chapman might have a word with some of the cast members, the women particularly, to control a tendency to shrillness.

But, the overall spirit that this cast engenders is one of zeal and youth and it is good to see such a young audience at a Rep production. Truly, there seems to be a new broom and, out of the plague, a spirit of ebullient positivity - which augurs well for 2021.