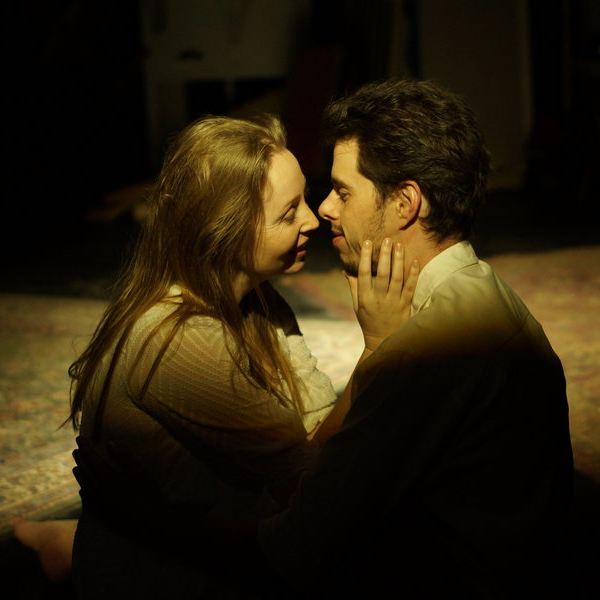 English writer and playwright Philip Ridley’s (born 1964) work has been compared for its similarity to the five only plays of English playwright Sarah Kane (1971-99). They both delve with unflinching ferocity into love, sexual desire, violence and metaphors of violence in conveying the wonder and meaning of love and in exploring the limits to sex and intimacy. Tender Napalm from 2011 is Ridley’s eighth adult play and twenty years after his first (the “adult” bit is required because he is also a prolific writer of children’s theatre – maybe they’re not as scary).

The oxymoron ‘tender napalm’ signs the confusion that often accompanies ardent desire, and also the metaphoric weaponry used in this play. Ridley begins near the end of his dramatic arc with a young man and woman (we learn they are 19 and 18 years of age). They are ardently coupled, and early in the piece, the man describes a mind-blowing orgasm during coitus. A grenade exploding in the woman’s love canal was conveyed as carnage and not ecstasy, and comes across with the vulgarity of a terrorist attack. While Mark Healy channels considerable and frightening energy into descriptions of fantasy adventures, and Carol Lawton jousts equally with Healy on matters of family and the past with shouty angst, Lawton and Healy – and director Rachael Williams - struggle to convey the subtext of compulsive desire, seduction and sensuality. Williams focuses more on conflict and imagery than on the sex addiction that keeps this couple together.

It’s a difficult play and the accomplishment of some tender napalm is probably why the director of the world premiere production, David Mercatali, won a couple of awards for his trouble. Ridley’s epilogue is actually the prologue where we witness the first meeting of man and woman who swoon with love at first site. It is in these scenes where Williams has the man and woman’s humanities emerge to the fore as they are not engulfed by enigmatic verbal imagery of exploding grenades, tsunamis and fields of dead monkeys; and the acting sparkles here.

Rachael Williams also designed an elaborate and striking set – a backdrop of household furniture and goods piled perhaps by a tsunami. Man and woman are shipwrecked and isolated and self-absorbed. The set was so awesome that it pulled attention from the players and they barely related to it. Moses Monro is an accomplished modern musician and contributed a magnificent, movie-like score which he controls live with every performance. Bravo!

If only the desire and sexual neediness seen at the end underscored.