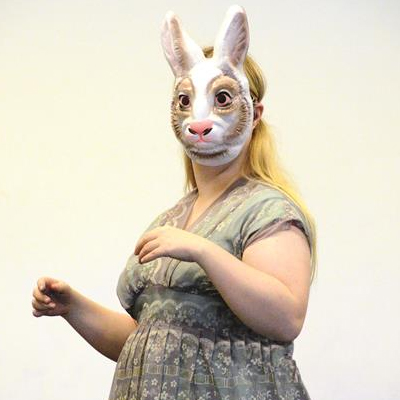 From a quizzical rabbit to plagues of wasps and monstrous humans, they slowly but surely invade the stage. They come sidling, dancing, looming, and spreading forth, sometimes in fabulous animal masks, to the sound of tinkling bells and against cartoon projections upon the back wall.

Zizanie is darkness and light, new and old, serious and capricious, clever and absurd.

It draws on the classics while commenting on the current. And it is all rather good fun into the bargain.

In other words, Meryl Tankard has not lost her magic touch.

Restless Dance is the company of performers with and without disability now directed by her former dancer Michelle Ryan. Tankard has honed these dancers into her own kaleidoscope of humanity, a series of truly endearing characters, fun-loving, vulnerable, kind, smart, quick, deft, and thoroughly interesting. Everyone can relate to them.

The performances are highly disciplined and rich in the choreographic idiosyncrasies audiences have come to know and love of Tankard.

She choreographs repetitive tasks for all and spreads them around the stage under moody Chris Petridis' lighting and the photo imagery of Regis Lansac until they achieve the aesthetic of a latticework of moving humanity. There are segments with a diversity of simultaneous ball play, scenes of street games, and scenes of ghostly mystery.

The dancers are not identified in the program but they are Chris Dyke, Kathryn Evans, Jianna Georgiou, Michael Hodyl, Dana Nance, and Michael Noble.

They are exquisitely costumed by Jonathan Oxlade who also has created a thrilling graphic otherworld of a set, much of it projected as backdrop. Therein dwells the grumpy man, an everyman figure who is at odds with the world. He is all power tools and noise, eradicating insect life and mowing down nature, replacing the songs of crickets with roaring, filthy machinery. It’s a familiar picture; right now in the endlessly venal in-building of suburban Adelaide.

He builds a huge Trumpean wall and retreats, poking his head up only to disapprove of the outsiders. He is a comically sad fellow, sunbathing in dressing gown and hat, swatting at flies, all alone. The kids play in the shadow of his world, occasionally trying to befriend him. There's a sad scene in which he washes off his wall and removes the joyful graffiti of little cartoon figures. The artist can only stand and weep. Her playmates come to her one by one bringing tissues to soak up her tears. She stands in a little island of tissues. And the man finds his heart and comes to comfort her. He has a proper handkerchief. And compassion evokes love evokes joy and the world breaks out with riots of daisies and sound designer Luke Smiles throws in wild Arabic music and Oxlade throws in the spirit of Escher design on the backdrop.

And, for the explosion of happiness, the audience is invited for a singalong of If I Knew You Were Coming I’d have Baked a Cake. The grumpy man’s castle has transformed to a cake factory. He takes centre stage costumed now as a waitress, and delivers the special gift of a piece of pure classic Pina Bausch momentum, as only our Meryl Tankard can and should be able to do. This is a tribute to the choreographer who changed the face of dance and whence Tankard gained much of her training and inspiration. It is even more delicious than the cupcakes the cast is handing out into the audience.

Furthermore, it has the biggest, longest, most outrageous curtain call in the business.