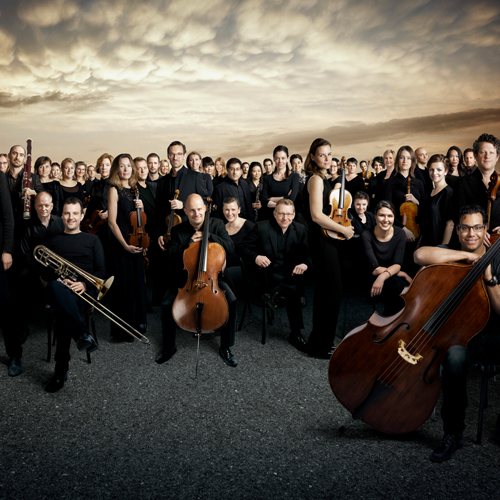 The French daily Le Monde has billed the Mahler Chamber Orchestra as the “the best orchestra in the world”. This is a big call, and whether it be true or not, the prowess and sheer class of the ensemble is unmistakeable. Today’s performance is one’s first experience of the Mahler Chamber Orchestra and I’m hooked. I cannot wait for the next opportunity to hear them again.

Conductor Laureate Daniel Harding set his orchestra in a non-traditional setting, with celli and basses to his left and second violins to his right. With a major brass section to his right, the overall effect is to broaden the depth of sound across the stage rather than concentrate the bass sounds to the traditional audience right.

Schubert’s sunny and bright Symphony No 3 in D, D.200 is not frequently performed. It is youthful and brimming with Schubert’s trade-mark melodies. The clarinets and bassoons are light and spirited in the first movement, and the clarinet is brilliant in the second. In the third movement, Vincente Alberola (principal clarinet) is so ‘into ‘ what he is doing that he ‘mouthes’ the music in between his sections and looks around at the other musicians with a beaming smile on his face. Alberola’s joy is typical of every other member of the orchestra, and all the while Harding keeps a firm grip on what they are doing but is ever so gentle (and precise) in his conducting gestures. Indeed, there are times where he doesn’t conduct at all and seemingly leaves the orchestra to its own devices.

Bruckner’s Symphony No 4 in E-flat, WAB 104 “Romantic” is aptly named and the Mahler Chamber Orchestra’s performance of it is surely a highlight of this Festival of Arts. It is the most popular of all of Bruckner’s symphonies, and some brand it as a ‘pot boiler’ that can be relied upon to sell tickets. This may be true, but it is easy to deliver a superficial reading of the Romantic and have it come across as a saccharine sequence of lavish and impressive grand melodies. In Harding’s hands, it shines. The wood winds and brass are luminous in the emphatic opening and are a beacon to light the orchestra’s way to the very end. The timpanist pays as much attention to the horns for his cueing in the second movement as he does to the conductor, such is the trust that they have in each other and Harding. It is a revelation to observe how much the musicians take note of each other. They are ‘into’ each other as much as they are to the music itself! Towards the end of the final movement Harding becomes more and more emphatic, but his style is very much a case of less is more, and it pays enormous dividends.

The audience reaction at the end is telling: caught up in the tsunami of emotion, three or four seconds of silence pass as the last sounds of the Romantic die away, and then all hell breaks loose. There is whistling, foot stamping, clapping, cheers, whooping and standing ovations, and it goes on and on and on. After leading the orchestra through five bows, Harding walks off and each member of the orchestra hugs the person next to them. They know they have done well, and their affection for each other is strengthened further.

The Mahler Chamber Orchestra is an outstanding ensemble. If you ever have the opportunity to attend one of their concerts, don’t pass it up.