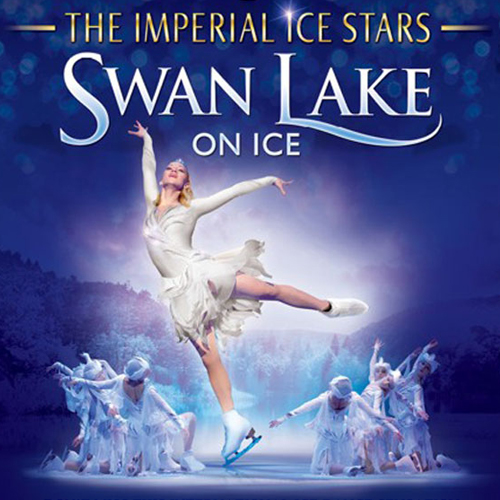 The Imperial Ice Stars take the genre of ballet on ice up several notches into an arguably unprecedented level of spectacle and excellence.

Its Swan Lake on Ice is simply breathtaking.

There are not enough superlatives for the athleticism and flawless expertise of the international skaters. The production is lush and beautiful while at the same time edged with danger. There are thrillingly flamboyant circus touches such as fire on ice and a swan who actually takes off and flies and flies and flies.

Tchaikovsky’s music soars, as performed by the Manchester Symphony Orchestra, and the fable of the bewitched swan and the handsome prince follows its traditional narrative through dark and light, love and loss, good and bad to a contenting climax followed by, oh balletomanes, turn away, a joyful, athletic encore.

It is Bogdan Berezenko as Prince Siegfried who lifts this production to dream status. Here is a tall, lanky Ukrainian skater who marries magnificence in skating skill with a beautifully brooding romantic presence. He is as much an actor as a vividly athletic skater, perchance today's Nureyev of the ice.

He is surrounded by quality, particularly in his romantic partner, Olga Sharutenko as Odette, the princess cursed into swan form by the wicked sorcerer. She astounds the audience with her exquisite flying and charms them when she swaps skates for toe shoes and dares to dance en pointe on the ice. With Berezenko, she flows and rears and rises and spins in myriad magnificent skating lifts while always conveying the sweetness and poignancy of the swan. As for her flock in their soft drapes of white skirt and little swan headdresses, they ebb and flow and swirl and, oh yes, tippy toe comically against the restless waters of the lake projected on the backdrop behind them. The corps de skating ballet at all times is energy and precision and ever wreathed in radiant smiles. The assorted champion and Olympic skaters therein embody graceful courtly dancers and exuberant folk-dancing peasants in a versatility of handsome, sometimes gymnastic, routines under the artistic direction of Tony Mercer.

Stanislav Pertsov plays the prince’s perky friend, Benno. He is a very showy, clever skater spraying ice in his wild spirals, leaps and slides. He also is a forceful comic presence. The lithe and vivacious Maria Mukhortova depicts Odile, the beautiful rival her sorcerer father Rothbart contrives to steal the prince’s heart. Sergei Lisev, a powerful and imposing skater, plays this classic villain.

The production sustains its energy and beauty throughout the two complex acts incorporating all sorts of surprises, not the least which is some daring silk work.

Albina Gabueva’s glorious costumes and the gentle animations within Eamon d’Arcy’s set projections add lushness to what is a simply dazzling show.

The only negative for Adelaide audiences is the staging at the Entertainment Centre’s theatre annex. The height of the ice stage is such that those seated in the stalls cannot see the skaters’ footwork, a flaw the Centre and tour organisers might amend for future shows.

But the opening night audience for this show was eminently forgiving, responding to the show with whooping and well-deserved acclaim.