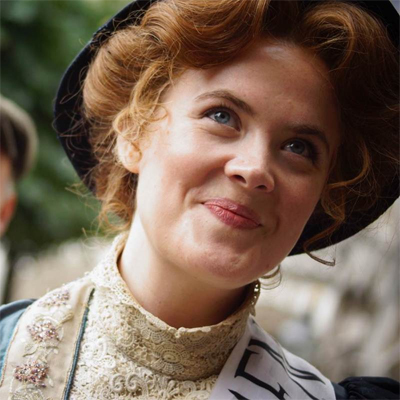 She was born in Bowden to become one of history’s most colourful suffragettes. She is reborn in Hindmarsh to become one of the Fringe’s most celebrated figures - and clearly, with a long performance life ahead of her. Muriel Matters would be incredibly happy with this turn of events, for she has become the subject of the brilliant Joanne Hartstone’s latest one-woman show.

Hartstone, already one of the most lauded and awarded Fringe performers Adelaide has produced, has researched deep into Matters achievements with help from Frances Bedford, Adelaide’s doyen of all things Muriel Matters. While Bedford has kept Muriel Matters’ history alive, Hartstone has brought Muriel Matters to life.

It’s a huge and exhilarating performance.

Since Matters was, among her many accomplishments, an elocutionist, it takes an actress with serious vocal skills to take on her talents. Hartstone has the training and the vocal range to depict her with ease. Not only but also, Hartstone has the modulation range to take her subject through a lifespan from shrill girlish excitement through eloquent narration and into speechifying to the masses.

Muriel Matters (1877 - 1969) was also a journalist, a lecturer, a teacher and an actress. Most famously, she was to chain herself to the grille of the Ladies’ Gallery in the British House of Commons in a spectacularly successful stunt to gain attention for the Women’s Freedom League which protested against the oppression of women in a male-dominated society and which called for female suffrage. Matters' background as an Adelaide girl gave her the added oomph of early female suffrage in her home town.

Joanne Hartstone traces Matters’ life through this and all her other outstanding exploits, including her down times and her rather strange, ever-postponed romantic life. It’s a nice, thorough piece of bio theatre.

It’s also a high-energy performance. Hartstone, dressed in well-tailored period garb and with the Matters talismanic cameo at her throat, performs this work with an interesting set, carefully cluttered with desk and coat rack and books and suitcase. A big shipping trunk symbolises her travel between Australia and England. When opened, it rather surprisingly puffs up clouds of smoke which emphasise major historic points as well as giving the stage a lovely, soft, smoky aesthetic.

Hartstone is something of a darling Australian girl in her own right. She has evolved into one of the major figures of the Fringe world both as an entrepreneur curating her own mini Fringe in the city and Botanic Gardens, producing shows as well as creating outstanding solo pieces. Her The Girl Who Jumped Off The Hollywood Sign was showered with five-star reviews and “Best of” awards where ever it was presented in Australia and overseas.

That Daring Australian Girl is destined for the same path of acclaim.

Where: Holden Street Theatres, The Arch