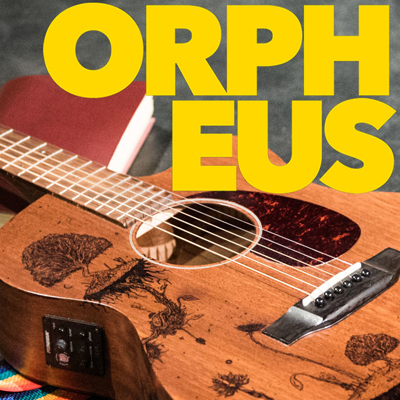 Vince breathes a sigh of relief when an audience member admits he is not up with Greek mythology.

He’ll not be nit-picking this alternative version of Virgil, then. This is to be a loose re-telling of the love story of Orpheus and Eurydice.

And thus does a quiet Fringe gem get started in the award-winning Joanne Hartstone’s snug little theatre space in the Botanic Gardens.

Hartstone, one of the most beloved of our actors, has turned entrepreneur with a full program of eight events in the Noel Lothian Hall.

This one comes from the Flanagan Collective and Gobbledigook of the UK. It is a two-hander, one of whom has just hopped on board for the Adelaide season. That’s Vince Fusco. Like Joanne he is a beloved Adelaide talent.

He is the narrator, reading from a well-worn palimpsest notebook.

Our Orpheus is an Englishman called Dave. His lyre is a guitar.

He’s a big fellow, an actor called Phil Grainger. He shucks off his great big boots and performs in thick winter socks, kicking up his toes from time to time as the mood moves him. He sings sweetly in a voice light and lyrical; not what one expects from such a big man. He sings Springsteen and gentle ditties of love and loss. Now and then he asks the audience to join in.

Fusco reads the narration, smooth, eloquent and unhurried. His voice is kind on the ear.

The audience sits on either side of the performers.

Soon they are swept into that comfortable realm of being told a story, a variation on an old, old, classic story of love and loss and transformation.

This critic was over-walked and jangled arriving at the theatre. She left entirely soothed and at one with the world.

Hence, the judgement is that this whimsical piece of classical storytelling is a little winner.