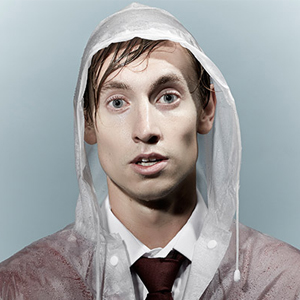 The latest word in agit prop theatre, Ian Meadows' Between Two Waves expounds, extrapolates and exhorts on the issues of climate change. There's nothing subtle about it. It is a full throttle anxiety play. It is not just the scientific issues of climate change but the characters who are cracking up under the fear and frustration of it all.

The principal character is a scientist who goes to work for the government's climate change department hoping to make a difference. But politics has corporate interests at heart. The more you say , the more impenetrable the brick wall. Perhaps.

One hopes that  Meadows' doomsday scenario will not be realised in real life. After all, Daniel, the scientist of the piece, has problems other than climate change. He is severely dysfunctional in almost every way; some may see him as having Asperger’s syndrome. He is work obsessed and has family issues, childhood guilts, acute anxiety and science-nerd ineptitude in dealing with women. On top of all this, his view of climate change is apocalyptic.

And there it is all around him - flooding rains which bring the insurance agent to catalogue the damage in his world. Of course, she is also the enemy - a front for corporate exploitation and legal clauses contrived to evade payouts.

Enter Elena Carapetis with sheath dress, stilettos, clipboard and mobile phone as the evil claims stooge. And what a lovely performance of corporate doublespeak. She doesn't miss a trick - and she is pretty tricky. It is a character which develops as the plot evolves and we meet her heart and vulnerability as the weather closes in. It's a Carapetis coup.

But she is not alone in powerful performance because Matt Crook is there on stage beside her - an exceptional young actor. He is all angst and uncertainty in the role of Daniel, strong only when trying to explain the science to the media. But Daniel has no common touch so Crook spends a lot of the play as a bit of a shuddering mess, from time to time having massive panic attacks which are exhausting to watch. It is not an easy role but Crook, under Corey McMahon's direction, makes him something of a tragic hero, weighed down by his belief in the imminence of climatic apocalypse.
This and his general nerdiness hamper his ability to forge relationships with women - until Fiona comes along. She plays by her own rules and, as it happens, works for the very climate department in which Daniel goes to work. They strike up a relationship. Ellen Steele steps into her skin and gives it intense vibrancy. She is more than engaging. There is something luminous about her, and it is not just the red hair.

James Edwards plays the one other character, the university professor for whom Daniel had worked before getting his PhD and heading out to work for the government. It's a simpatico performance, ably complementing the senior actors in the pivotal roles.

It's a complex play with simultaneous timelines which are quite effective. It also is wordy and didactic but with lots of passion and expressions of human vulnerability. It's a tragedy but it is not without hope.

McMahon gives it a strong, punchy pace, making it tight and intense.

The set helps. Olivia Zanchetta has designed a tropical-style room with long, louvred windows and a ceiling which one feels coming in on one. The walls are cunningly created to be semitransparent and, at the play's climax, to be pelted by water which pours in torrential rivulets down its panels.  Throw in Nic Mollison's usual standard of perceptive lighting and Jason Sweeney's smart sound design, and one has a terrific production.

The play, however, still seems to have some teething pains. It has been long in the making and, thought provoking as it is, it niggles with the odd logistical perturbation.

The bandage on Dan's hand is plain annoying. It is perhaps symbolic of injuries to the world, but it is also purportedly covering an injury to the character and it remains upon his person through the thick and thin of the play's timeline, becoming a puzzling distraction - which is unworthy of a play with a serious message.

When: 9 to 25 Oct
Where: Bakehouse Theatre
Bookings: bass.net.au