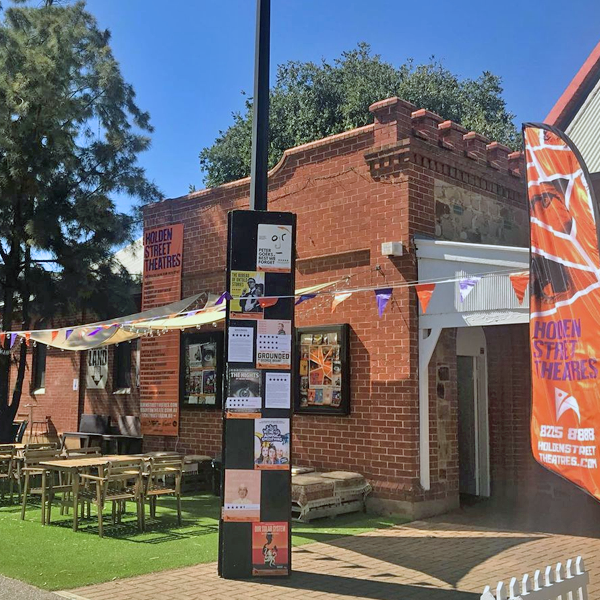 In this dire time of pandemic  Adelaide’s Holden Street Theatres is making thrilling history with its famous Edinburgh Fringe Award of 2021.

It is breaking ground where there is no ground to break.

It is rising above the limitations of covid and creating the theatre you have when you can’t have theatre with - wait for it - a special venue for international streaming!

The Edinburgh International Fringe’s winner of the famous Holden Street Award is coming to us hot from Canada with bells and whistles and its own cutting edge artistry and excitement.

“It is now a requirement for the performing arts, and in particular theatre, to be able to offer work in both the live and digital formats that audiences across the globe are wanting.

“This is the way, if we are to support our artists in the future.

“With many international theatres only now opening doors to live audiences, they have focused on creating exceptional work for the screen, in some cases by reimagining previously staged theatre productions.”

It leads off with:

The Darlings, a provocative evening of drag from Vancouver which, says Lott, is probably the most avant-garde of the winning pieces.

They are said to turn conventional drag upside down by exploring the "genderqueer, non-binary, and trans experience through the use of movement, poetry, performance art, theatre, and immersive installation.”

Not only but also, on the winning Holden Street ticket is The Boy in the Moon - a hit play about Canadian journalist Ian Brown’s life with a severely disabled son. It is written by Emil Sher and has been heralded as one off the most emotionally engaging productions of Canadian lockdown.

Then there’s Inside/Out: A Prison Memoir, a darkly vivid account of years spent inside a Canadian prison. True story and “darkly funny”, say the critics.

These striking works are part of the East Van to Edinburgh push, a really entrepreneurial global platform of theatre companies under the imprimatur of award-winning British producer Richard Jordan.

It is part of a production force called The Clutch, previously known as the Vancouver East Cultural Centre - a long-established and innovative Canadian arts hub.

2021 was the first year for this eclectic electric Edinburgh invasion from Canada and, covering some of the key artistic and social issues of the moment, its works certainly stirred the Holden Street soul. Its attention to First Nation artistes and concerns was among its attractions, along with diversity, disability and gender equality.

And here emerges the very positive new direction for international theatre presentation — the result of savvy theatre people who will not be defeated by the pandemic.

These positive arts entrepreneurs were quick to show their creative wares to Edinburgh and thence, by acclaim, to Holden Street.

Martha Lott said that the Holden Street judges had been steadily watching shows throughout the Festival month with keen entrants sending in links.

"This is the only award of its kind in the world to tour work from Edinburgh to Adelaide, or in fact Australia and in the past thirteen years we have toured over 70 productions including award winners and many of the runner up shows, with winners such as Sh!t Theatre Drink Rum With Expats, Build a Rocket, Bound, Angel by Henry Naylor and the incomparable Flesh and Bone.”

Thus has Holden Street received more than 80 awards for its Fringe program from industry and media.

Similarly, it has earned very loyal audiences who have made clear that, come what may, they want to be at the venue for the Fringe.

“They have shown that they wanted to experience the atmosphere of the hub, not watch theatre online at home,” explains Lott.

“They wanted to watch their performing arts live and get back to their familiar and secure surroundings and engage socially at the venue. ‘

So, Holden Street provides a solution.

Yes, patrons can gather at the theatre and see international work.

They will be rewarded by an On Screen program in which shows will be presented in high quality digital format.

And, they will experience them in the comfort of armchairs in a spacious and swish lounge room, where they can enjoy luscious wine and cheeses from the Holden Street bar and café.

“This intimate cinema will house ten people who will enjoy an evening of great international theatre and entertainment,” declares Lott.

“And then they walk outside and see amazing live local theatre.”