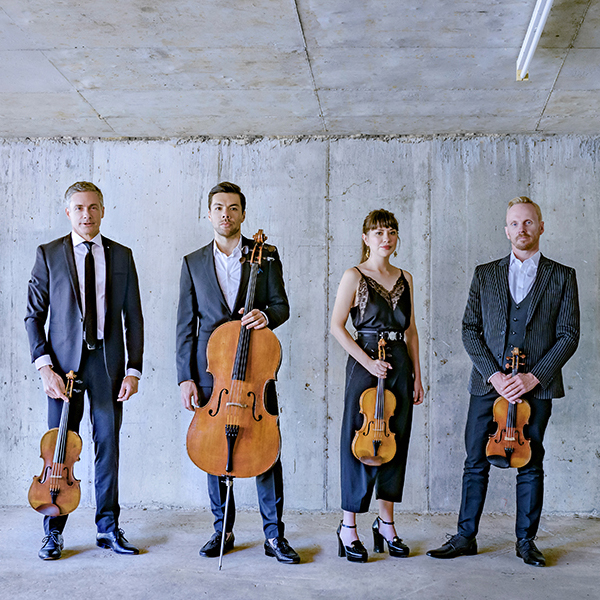 Ancient Greek philosopher Heraclitus once opined that the only constant in life is change, and change is certainly afoot at the ASQ as its makeup enters a new phase. Tonight’s concert is violist Stephen King’s last (in Adelaide) as a member of the ASQ, and it is Michael Dahlenburg’s first as the new cellist replacing Sharon Grigoryan who left at the end of last year. It was interesting to observe that both Dale Barltrop (first violin) and Michael Dahlenburg both wore resplendent dusty lavender coloured evening jackets, while King sported traditional black as if not to draw attention to himself. But with the announcement of his departure, King was always going to be in the spotlight in some way throughout the evening. More on that shortly. King did however wear lavender coloured socks which might be considered a nod to the fact that he won’t entirely be leaving the ASQ: he will remain in an administrative capacity to manage the organisation’s education outreach program.

Written to be performed without a pause between its sections, Bartok’s String Quartet No.3 is redolent with motifs derived from Eastern European folk music traditions, including an unexpected droning accompaniment on violin and cello that allowed the spotlight to settle on Stephen King’s honeyed work on viola, at least for time. (Interestingly, the same spotlight shone on him in the third section of the Fischer, which Barltrop described as a “soliloquy for solo viola”.) The Bartok is often played with unconcealed passion - as a nod to the Roma heritage of some of its thematic material - but on this occasion the ASQ played with restraint and carefully exposed the melodic and rhythmic riches of the piece.

Mendelssohn’s String Quartet No.1 in E flat major was written when he was only 14. As the work of a composer who is ostensibly in the grips of classicism at such an early stage of his development, the quartet is unadventurous in its scope and structure, but it is lyrical and often on the verge of ‘breaking out’ into the unexpected. The temptation for the performers is to overplay “one’s hand”, but the ASQ do not fall into that trap and the result, not unlike the Bartok, is a tightly executed performance that allows the fine detail to shine through clearly, especially in the second movement (marked ‘Canzonetta’) that was quite beautiful to listen to.

Pavel Fischer was born in the Czech Republic in 1965 and is the director of the Winterschool program of the Australian Festival of Chamber Music. A violinist, Fischer is also a composer of some note and his String Quartet No.3 is a highly enjoyable and notable work that merits being regularly performed around the world. Entitled “Mad Piper”, the quartet is named after Bill Millin who was a Scottish piper who apparently led a company of soldiers into battle at Normandy while playing his bag pipes! Predictably, a stylistic feature of the composition is drone-like accompaniment produced on the cello and violins at various times against which the viola plays. King relished the scope given to his instrument and abundantly demonstrated why his playing is much loved and why he will be greatly missed. The composition also features gypsy-like motifs, rhythmical structures and playing techniques that hearken back to the Bartok at the start of the concert, somehow completing the loop and giving the entire program a satisfying coherence.

When: Closed in Adelaide. Until 18 June elsewhere across Australia