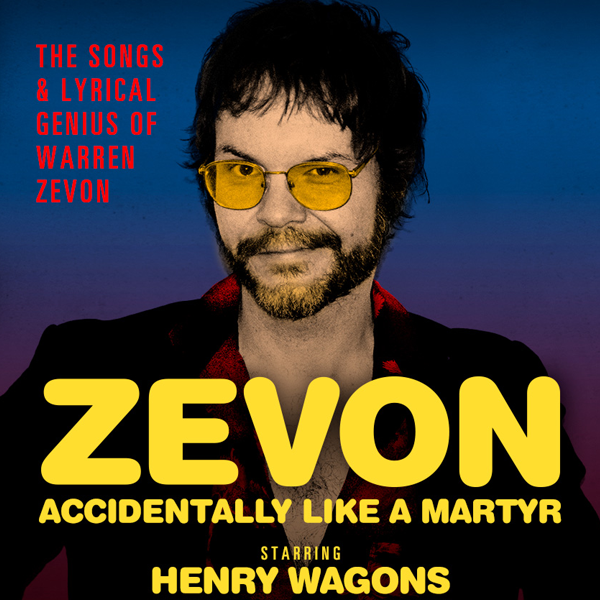 I’m a bit bemused as to how one can perform an entire tribute show to the life and songs of Warren Zevon and not mention his astounding sidekick guitarist Waddy Wachtel, who played on the vast majority of his recordings. Yet there it is.

For the sake of posterity, Zevon gave us Werewolves Of London as well as the Linda Ronstadt hit Poor Poor Pitiful Me, both being presented tonight.

Henry Wagons is a consummate craftsman of the stage, quick with a joke or to light up your smoke, and there’s no place he’d rather be. With four piece band The Martyrs backing him up, Wagons is an engaging and vibrant host, at times MC and announcer, at times the singing embodiment of Zevon who (I am astounded to recall) died back in 2003. Time truly does fly.

The show opens with Lawyers, Guns & Money then moves smoothly on to Excitable Boy; how is this going to work when there are so many Zevon penned songs to choose from? Henry Wagons introduces himself, leaping around the stage, nervous energy personified.

I Was In The House When The House Burned Down from 2000s album ‘Life’ll Kill Ya’ comes next, followed by the amazing Roland The Headless Thompson Gunner (back to 1978) allowing Wagons to leap back and forth through time and space though this is for the most part a chronological tale. Somehow it all makes sense and the audience are lapping it up; over three hundred committed Zevon fans and very few of ‘em under the age of fifty.

The songs keep coming: after the mid-time break drummer Holly Thomas takes the microphone for a rendition of Poor Poor Pitiful Me, which is lovely, and yet something is missing. The Martyrs seems to be stuck in second gear, destined not to develop the torque necessary to do these songs (and this performance) justice. And it is a great performance in the hands of musical director and pianist Lachlan Bryan; or it certainly should be. Carmelita is a dead set highlight and it is Werewolves Of London which somewhat predictably closes out the show. Bassist Damian Cafarella gives that jaunty piano signature a solid underpinning.

Finally, in the encore, guitarist Michael Hubbard shows real animation and for a glorious three minutes, or so, The Martyrs (without Wagons onstage) are able to show just what they’re capable of. In The Mutineer, just for a moment or two, the persona of Waddy Wachtel had arrived onstage.