Festival: Voyage To The Moon 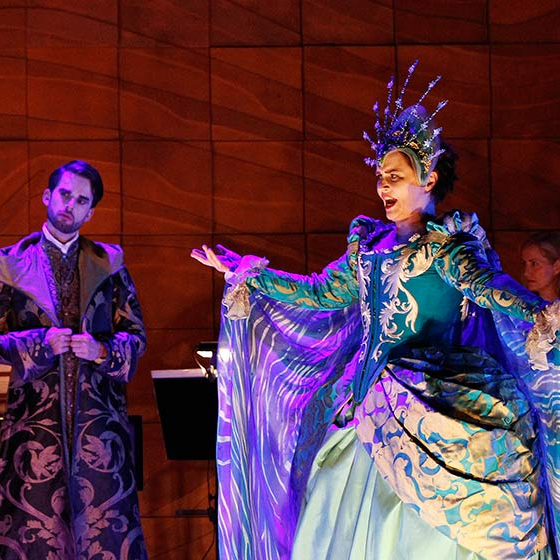 Voyage to the Moon is a happy collaboration between Musica Viva and the Victorian Opera. It is the most recent addition to the genre of ‘pasticcio’ opera in which selected arias and musical numbers from pre-existing operas are joined together to create an altogether different narrative. The so called ‘juke box’ musical (such as Mama Mia) is in some ways a modern version of pasticcio, which has been around since the mid eighteenth century.

Voyage to the Moon is the brain child of the celebrated Michael Gow (writer and director), Phoebe Briggs (musical director), and the late and great Alan Curtis (musical arrangement) who sadly passed away during the development phase of the opera and was succeeded by Calvin Bowman. The result is a thoroughly entertaining chamber opera that has been warmly received around the country. This performance is featured as part of the Adelaide Festival of Arts and played to a near capacity audience in the iconic and stately Adelaide Town Hall.

In short the story is a fantasy about unrequited love. Orlando (sung by Emma Matthews) is rejected by his sweetheart and is driven insane. His friend Astolfo (Sally-Anne Russell) tries to comfort him, and Magus (Jeremy Kleeman), a wise magician, also intervenes and takes Astolfo on a journey to the moon – the home of lost things – to find Orlando’s missing reason. Before Astolfo can complete his mission he needs to convince the fierce Guardian of the Moon, Selena (also sung by Matthews), that Orlando is worth saving. Astolfo offers to sacrifice himself to save Orlando but is spared by Selena. On returning to Earth, Orlando, who is still enraged, seeks to fight Astolfo but the magus intervenes and returns Orlando’s reason to him, and they all live happily ever after.

With so much high emotion one might have wished for more demonstrative acting from the cast, but forsooth there was not! Instead, what we got was a lot of polite posturing, stand and sing, and stares that were double charged with spiteful meaning. But hey, its opera and our disbelief is meant to be suspended!

After a tightly controlled start, in which Matthews in particular seemed to be coming to grips with the acoustic of the immense Town Hall auditorium that can be unkind to some vocalists, the piece hit its straps with Kleeman’s first aria Now We Ride Bravely by Handel. Kleeman, who is barely twenty-five years old, has a booming lyrical bass baritone voice that easily fills the auditorium with lush tones that are equally strong at both ends of his register. Top stuff! He can moon walk as well, and has an actor’s flair. Matthews was especially impressive in many difficult recitatives and made it patently obvious why she is one of Australia’s best singers. As the Guardian of the Moon she loomed larger than life. Russell sang Astolfo beautifully, demonstrating bel cato accomplishment.

The setting was minimalist, and it didn’t need to be anything different. Lighting was stylish and empathetic, and the costuming was lavish. The on-stage ensemble of seven was expertly led by Briggs from the harpsichord.

Voyage to the Moon is a success story and deserves to be widely seen and enjoyed.