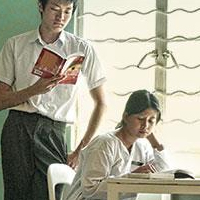 OzAsia has been giving Her Maj some very unusual makeovers. For Parah, the centre aisle is closed and the auditorium is sectioned off by sets of  curtains. The audience is directed down the sides to choose seats in the centre of the very front of the theatre - where they easily can read the surtitles. This is essential - and very demanding, since it is a wordy play. Its earnest message is lifted by humour, most of which puts the Bahasa Malaysia speakers in the audience into giggles but puzzles those struggling with the rapid-fire surtitles.

This production by Malaysia's The Instant Cafe Theatre Company has come to reveal what is really happening beyond the  tourist image of our Asian neighbour. Since the 1960s,  a Solidarity movement has sought to re-emphasise the multicultural character of the country, calling for a more Malaysian Malaysia. The country contains a substantial Chinese and Indian population and, as the OzAsia show explains, the ensuing generations have struggled with the status quo and the political conflicts have troubled many.

"Parah" means "wounded". The play, written by Alfian Sa'at and directed by Jo Kukathas, depicts the abrasions between a group of secondary school friends. Catalyst to an outburst of racial angst among them is a page missing from a book called Interlok. It would seem the missing page defined Malaysian Indians as "pariahs". Interestingly, the one girl in the group is Malay and Muslim and she discovers that her  choice of male Chinese, Indian or mixed-blood friends is frowned upon by her Muslim family and community.
The boys each struggle with their racial identities and their place in modern Malaysian society, popularly promoted as 1Malaysia. The play delivers its message with various vignettes, an austere set of tall shelves, and low perspex tables which are moved around to change mood and venue.

Some wild tropical weather is brilliantly depicted with an impressive in-the-round sound effect, giving a stronger sense of place.

The actors deliver passionate performances and, with didactic fervour,  give us what is probably a very much needed injection of the raw, real life or our northern neighbour. It is a fearless and furious play and one hopes that more people than the thin opening night crowd will seek to learn its revelations.

When: 20 to 24 Sep
Where: Her Majesty's Theatre
Bookings: bass.net.au