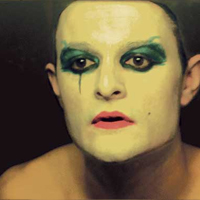 Everyone knew the theme and the audience rocked along as the follow spot lit Tommy Bradson through mock exits and then out for interval.

They'd been pleasantly smothered in a fluffy blanket of Australian showbiz nostalgia - the wild and wonderful career of Reg Livermore.

The man himself was in the audience, fresh from receiving the Adelaide Cabaret Festival's inaugural Australian Cabaret Icon Award. He came onstage at the end of the show to acknowledge the considerable talent behind this tribute show and to remark that, in all his years of performing and creating idiosyncratic stage and television characterisations, he had never really had a chance to "see" what he had been doing. Bradson delivered this experience to him - and to the Adelaide Cabaret Festival.

Bradson, ever generous-spirited in this tribute cabaret, projected several videos of the real Reg doing the original shtick. And, therein, most oddly really if you consider the time and place of the show, there was Reg Livermore doing the old end-of-the-world dump on Adelaide. The dull Adelaide throwaway gag which goes down so well in Sydney. It took the happy Adelaidean breath away. It felt a bit as if the honoured guest had just spat in the soup. What a strange piece of editing.

But Adelaide is bigger than that. We are damned if Eastern States insults will dampen our spirit. Despite the insult, we loved the show - because it was good. We are harsh critics so when we appreciate something as good, it is damned good. No sycophancy.
Tommy Bradson does good Reg.

And there is lots of good Reg to be done. The man had a broad repertoire. Hence there is rollicking period music, evoking sweet nostalgia among those who once were the spaced-out dope generation of the 70s. And there were plenty of them there on opening night, revelling in their associations with Captain Jack and White Rabbit.

Bradson does not have the physique of a Livermore, but he moves well and he can do the vocals, despite a few imbalances in the opening night sound.

The band onstage bops behind him and two absolutely delicious backing singers dress the stage, adorning the big numbers and entertaining through the costume changes. Not that there are too many of those. Betty Blokk Buster comes more undressed than dressed with her neat little bare behind. Poor old Leonard needs little more than a dressing gown. Beryl at the Sink, however, needs not only costume but sink, chains, meat tenderiser and lots of dishes to smash. She was and is a triumph of a character bested only, perhaps, by Vaseline Amalnitrate, the Ocker butch AFL Ballet star, also wonderfully realised by Bradson.

Tommy Bradson "re-imagines" the Livermore heyday of forty years ago with raunch and wit, with tenderness and raucousness - the full gamut. The moods of high and low, exuberance and refection, are nicely balanced throughout.

Oddly, the show's extremely soft ending leaves the audience somewhat in the air. Billed as running for 2 hours and 20 minutes, it finishes on the two hours with everyone expecting a bumper encore. Frank'N'Furter, perhaps?

It simply does not materialise. The band meanders off the stage where Bradson, bare-chested in braces, is slowly sweeping with a broom. Then he, too, drifts off. The audience is not sure whether to stay or go - and the moment for enthusiastic acclaim is lost.
So here it is. Rounds of applause to you, Mr Bradson.

When: 7 and 8 Jun
Where: Space Theatre
Bookings: bass.net.au