Ziggy – The Songs of David Bowie 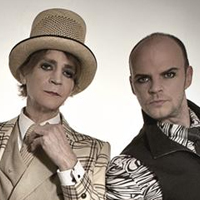 The stars were out last night.  Beneath the twinkling backdrop, the six piece band called Ziggy took places and from the shadows emerged an unsure-looking Bowie in a gold suit and sprouting angels’ wings.  Wait a minute, isn’t that Jeff Duff, looking like the aftermath of major surgery and gone to heaven?  The first song was lame and I thought, what sort of a night will this be?  Thankfully there was another, more energetic and charismatic Bowie, the Bob Dylanesque Steve Balbi.  But wait, there’s a third unlook-alike Bowie, Brydon Stace - and so these three rotated through the pop anthems that guided my teenage and university life.  And it just got better and better and better.

Duff is a legion and pulled together a top band from the semi-retired greats of Australian music, but including Kate Cerberno’s brother, who did a Bowie as well.  Most of the audience was singing along, who wouldn’t – to Starman, Rock’n’Roll Suicide, China Girl and Space Oddity.  Balbi’s vocalisation of Life on Mars was off the planet and Stace could crack pepper with his shattering high notes.  Duff was the steady, older Bowie with a reasonable likeness that you could lose yourself in.  Together their different approaches to Bowie infused the show with tremendous variety.

It ended with everybody on their feet, in the aisles of the Space, dancing to Young American and finally Heroes.  A beguiling tribute performed with love, a tight band and singers on the loose.