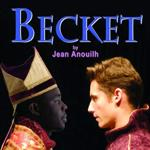 The English love their historical drama.  After French dramatist Jean Anouilh penned Becket in two fifteen day spurts, it quickly had productions on Broadway, the West End and in Hollywood film by the mid-1960s with the best British actors of the day:  Laurence Olivier, Peter O’Toole, Richard Burton, Anthony Quinn and Christopher Plummer.  Personally, I wish Anouilh took a bit more time to consider the work.  It is a strange brew of fetching insights into the exercise of power, stating the obvious and comical camp innuendo.

Briefly, we are talking about Medieval King Henry II the great grandson of William the Conqueror, and Thomas Becket, his pal and a sensible person to have around, whom he installed as Archbishop of Canterbury to exert earthly influence on the tax-avoiding Church.  The plan fails when Becket takes his new job seriously and rifts the friendship.  The rest is history but not as Anouilh wrote it.

Anouilh’s quirky sense of humour is evident in a little bit he wrote for a magazine shortly after the play (included in director Rob Croser’s as-usual excellent program notes). This same cheekiness is revealed in Becket.  After the audience enjoys the momentum of some serious drama, Anouilh throws in something trivialising or resembling self-parody that jolts and surprises.  I got the impression that the actors had great difficulty handling this dichotomy.

Samuel Rogers as Henry and Stephen Tongun as Becket were required to do more than say the lines.  There was not the slightest alchemy.  Tongun gave Rogers nothing to work with and Rogers’ lamentations lacked veracity.  Rogers portrayed an impish, immature and cruel king impossible to empathise with and Tongun’s Becket was a cool rationalist.  It was therefore difficult to imagine and buy into the subtext.

The gay colours of the bishops didn’t help and some other costumes were a bit ‘Star Wars’.  Shona Benson on the other hand easily conveyed her Gwendolen’s warmth and then desperation at her lot as chattel to the princes.

David Roach and Todd Gray’s scene as the Pope and a cardinal respectively having a fireside chat was amusing for its semblance to a spoof of an Italian talk show.

Rob Croser and David Roach’s set conveyed superbly the halls of castles and cathedral interiors where most of the action took place, although things were simplified to something you might see in the Church of Mormon.  Even roaming pillars participated in the scene changes and combined with the sound and lighting design, the production had a very professional feel.  Nicholas Ely practiced his newfound graphic design skills on the poster and program designs and came up with real stunners.

Director Rob Croser got the show underway with the high level of style and discipline that hallmarks Independent shows, but this production doesn’t follow a consistent thematic arc.  Like Medea, the most important action of the play doesn’t happen on stage, but we nonetheless have to be there with it.

When: 20 to 28 Apr
Where: The Odeon Theatre
Bookings: bass.net.au