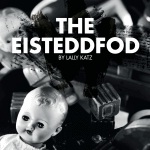 Playwright Lally Katz is an intriguing individual whose work I would like to see more of, after enjoying five.point.one’s South Australian premiere of The Eisteddfod.  Katz is New Jersey-born but now easily floats over land and sea between New York and Melbourne, where it seems most of her 20 full-length plays have been produced.  The Australian connection is her graduation from the Victoria College of the Arts in 2000 after migrating to our Emerald Isle as a teen.  Goodbye New York, Goodbye Heart premiered in the Big Apple last year and in 2011, she will have three world premieres in Australia:  A Golem Story at the Malthouse, Neighbourhood Watch at Belvoir, and Return to Earth at the Melbourne Theatre Company.  Watch her space.

Cassandra Backler’s imaginative set had the audience looking through the invisible wall into a paper-lined room made luminescent white by Ben Flett’s backlighting.  A sense of confinement was manifested by exaggerated perspective.  Motifs associated with childhood abound.  The enigmatic hour commenced with a short narration from the author spoken by Emma Beech giving us a hint who the two players, Kate Roxby and Brad Williams, were actually supposed to be.  You’ll have to go to figure out for yourself what the heck is going on.  Something like a black comedy, it’s also a psychological drama and absurdist.  Just when you feel you have it, your solid reality is liquefied and recomposed into another.

Roxby and Williams are wonderfully expressive.  Both successfully illustrated childlike natures, which counterpointed their physical age.  Williams especially is superb at keeping his numerous characters separate and unique, often applying a subtext of menace, but ranging from whining child to manliness.  He also brought to life a tiny toy bear in a bit of puppetry.  Roxby is a great enunciator – never missing a consonant – and her Gerture is a perennial victim in her imaginary world while attempting to lead her brother in their sibling space.  Corey McMahon’s first and most important job as director is choosing the right script, so big tick.  While there were some terrific exposés on everyday irks, behaviours and dreams that were immediately identifiable and humourously urbane, it’s devilishly difficult to be emotional enmeshed with Gerture and Abalone – so I wonder if there is even more to be wrenched out of the script.  I was more clinically interested than having any empathy for these poor misguided souls, and plot-wise there wasn’t enough at stake.  Winning the Eisteddfod doesn’t compete with dealing with reality, which never seems to intrude.  Jason Sweeney’s sound design and original compositions kept things edgy and foreboding.

An intriguing and beguiling night out that will certainly end in a long discussion with whomever you came with.  At the very least, you’ll get a slide show on the origin of the Eisteddfod.