A Comedy by Brown Council 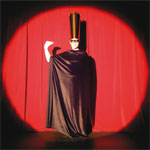 I have no compunction in telling you this is easily the worst Fringe act I have seen this year, or perhaps in any year.  Brown Council, comprising Frances Barrett, Kate Blackmore, Kelly Doley and Diana Smith, say that this show investigates the function of comedy in contemporary society, and particularly whether comedy has the ability to transcend its “low brow” status and to transgress gender, class and cultural boundaries.  I’m not sure why comedy should have an ability, but they clarify in their program notes – “to explore the idea that all comedy is tragic, that laughter is at the expense of a guiltless pleasure taken from the misfortune of others.”  If I may simplify these thoughts – to investigate if all comedy is made through the misfortune of others.  I didn’t feel that this investigation was made and therefore the work fails to achieve the objectives of its creators in my view.

There is a narrator and three performers who do a selection of five acts, like stand-up comedy, a monkey dance, slapstick, various forms of traditional comedy acts.  Hardly all comedy.  Slapstick was two people slapping each other in turns for a few minutes.  This was gross and gruesome to witness.  Nothing was proved as there was no comedy.  How about watching two women each eat three bananas at once, pushing the mushy yellow stuff back into their mouths as it falls out?  Or one person stands in front of another and throws a cream pie into their face.  I watched the digital clock anticipating when my hour would be up.

What was demonstrated in this show is that these acts when taken out of context are not funny.  Comedy is about timing, misdirected attention, exaggeration, irony, sudden change, and wit.  None of these were evident except in one of the stand-ups.  In slapstick, it’s not the hitting; it’s how you set it up.  You do get to throw tomatoes at the end of the hour.  Even I threw tomatoes to release my frustration and I hate the waste of food in any play.  I didn’t think the Brown Council was going to dine on them three at a time to make a point.