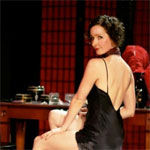 Blackcat Productions. The Promethian - 1 to 9 Mar

I haven’t been in the Promethean since its makeover as a nightclub and it is fantastic.  Great cabaret set-up with a green luminescent bar extending from the foyer to the back seats.  And on stage, in front of a sell-out crowd, was Lady Sings It Better.  Conceived by erstwhile Bathurst-based uni students Phoebe Meredith and Maeve Marsden, Lady Sings It Better is a revolving door for new female vocal talent.  The idea is to give songs by pop male songwriters of the last few decades new arrangements with that feminine touch.  This works in spades.  The gals give the lyrics clear diction, thus showing off some top pop poetry, and the songs are jazzed up in truly novel deliveries for single or chorus renditions.  There’s even a couple a cappella.  The ladies are backed up by piano, drums and bass in the guise of bass guitar or double bass.  Composer Tim Hansen is the musical director but he takes no credit for the arrangements on his website.

I Can’t Get No Satisfaction given early in the concert was broken down into its parts and later the Oil’s Beds Are Burning was literally spine tingling as the crew found the song’s awesomely honest plea.  The advertising postcard promises sexual references, coarse language and some bad dancing, but actually all were provided aplenty.  The ladies aren’t shy about their sexuality – some are straight and some are carpet munchers.  Some are also wildly unfit and ran out of puff on the more energetic bad dancing numbers and appeared trapped in uneasily moved bodies.  That didn’t look very professional.  Anna Martin, who opened the show playing the piano as well, has what it takes – poise, voice, the necessary moves and a bit of panache.  Fiona Pearson provided many comedic reflections and is in fact a stand-up in a parallel universe.  Generally though, the banter and horsing around seemed a bit forced.  The ladies sang well together most of the time but occasionally it was less than successful.

I loved the choice of songs from amongst the catalogue of AC/DC, Leonard Cohen and Bon Jovi as well as the aforementioned, and I loved all of the new arrangements.  I just think that the majority of the ladies didn’t show they have what it takes for this act to reach its full potential.