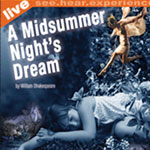 A Midsummer Night’s Dream is the popular tale of 4 lovers and the web of passion Shakespeare has created to keep them running through the woods in pursuit of each other’s affections. The tale is well known, so I will save you the synopsis, but so often performed is this production that it is risky and difficult to create something new and exciting that audiences have not seen before.

I recently reviewed this play at the 2008 Adelaide Festival of Arts, and thought I had seen the piece stretched to its farthest extents - translated into 12 different Indian dialects and performed by actors, singers, dancers and acrobats - but this performance took on a whole new life and was the funniest interpretation since Shakespeare himself wrote the play. Spoken in traditional Shakespearian English the show had great energy and life, and it was evident that the players themselves were enjoying performing as much as the audience was enjoying watching.

Presented at Coriole Winery by Essential Theatre, the ‘under the sky and in the light of the sun’ performance attracted an audience of around 300. Coriole provided the wine and a small individual hamper of cheeses, fruit and oven baked foccacia’s for each ticket holder, a successful element completing a great night of theatre.

The players included Pablo Calero in the role of Demetrius and Glenn van Oostrem as his opponent Lysander. Each player crossed over in roles as fairies and performers, but Oostrem’s Lysander came into its own when his love for Helena was realised, his fairy Cobwebb was also delightfully camp. In the roles of Helena and Hermia were Aimee Blesing and Jane McArthur respectively. Blesing was a powerhouse in both of her main roles, she demonstrated great contrast being both perfectly simple as Helena and strong and anxious as Quince. McArthur was great as Hermia, but shone most brightly as Snug – an audience favourite with a dastardly “roar”. Adrian Dart and Amy Humphreys played Oberon and Titania and had great energy bouncing off each other. Dart used his eyes to great effect as Oberon and the control he demonstrated over the fairies and humans was very effective. Drew Tingwell had the popular role of Bottom, and milked it for all it was worth. His great physicality lent a lot to the role and his projection and intensity was awesome. The highlight of the show however was Puck. The most famous role of the production, and played by Sophie Lampel. Puck was as playful and menacing as the fairy should be - Lampel was truly excellent. Her focus was unbreaking and the audience continually showed their appreciation, Lampel created the best Puck I have seen in as many shows as this script has characters.

The venue was perfect the night, divine – with a good bottle of wine to share, this company has produced an excellent show that delivered a night of laughs and enjoyment for all!