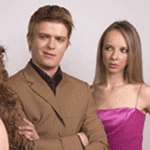 Mixed Salad productions has taken one of the earliest of Shakespeare’s pieces and transformed it into a play suitably pitted in the year 2007. Transforming the bards characters into film stars, movie producers, personal assistants and subservient ‘vinyl clad’ hermaphrodites.

The story is of two best friends who are to be separated in pursuit of life, love and careers, but whom through a chance meeting, both happen to fall in love with the same woman. The gentleman are Valentine and Proteus, the latter definitely a gentleman, the former more likely a cad.

When Valentine realizes his love for his friend’s affection Silvia, he enters into a devious plan to have Proteus exiled so he can be free to have Silvia to himself, and all this whilst cheating on his own love Julia.

Many of Shakespeare’s later themes were tested in this piece – notably the disguising of a woman as a man in an attempt to infiltrate and better understand the affections of their love.
Director Dave Simms has cast a talented and competent cast in this production and every person on stage plays an integral part, and usually more than one, in bringing this text to life.

James Edwards as Brad Valentine is skillful and heart-felt and juxtaposed to him, Adam Tuominen as his friend Ben Proteus is conniving and sleazy whilst remaining suitably torn by his dear friendship and recent affections. Jamie Hibbet as Silvia gives us much feeling and empathy of her love for Proteus and transforms wonderfully to play her dual role as Lucetta. Natasha St Clair Johnson really looks the part with her Hollywood smile and delves into the torment Julia suffers at the hand of Proteus as she discovers his love for Silvia. Sue Wylie as Ann Duke is formidable and a force to be reckoned with, her duke has much presence and controls every situation. Damian Carr’s Speedy is cleverly and believably nervous and Glen Christie as Thurio has no trouble convincing us his character is arrogant and proud of it. The standout however was Nicolas Ely, another actor playing multiple roles Ely showed great affection of his employer Proteus and distain at his constant rejection. His brief monologue with canine Tomasito was unfortunately upstaged, with most of the audience’s attention focused on the dog.

The set was cleverly painted as a film strip and the action was suitably placed. Lighting was a very effective element when used in the charters rumination sequences. An excellent production that requires concentration, and deserves it.