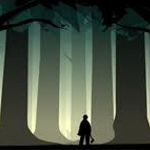 Into the Woods is the story of ‘Happily ever after’ – or not, as the case may be. The musical story told by lyricist and composer Stephen Sondheim is billed as “one of the most brilliant pieces of contemporary music theatre in the repertoire”, and this production supports that claim!

The story is based on the interwoven legends of several well know fairytale characters including Cinderella, Jack and his mother, Little Red Riding Hood, Rapunzel, and the Baker and his Wife. The first act is concerned with their individual journeys to reach ‘Happily ever after’. The second act goes beyond this, to demonstrate that life is not as simple as good vs. bad. It’s about the choices we make, the way we influence others, and most of all to ‘be careful what you wish for’, because you just might get it!

Pick any actor or actress in this production and you have an excellent performance, special mention must go to Andrew Crispe and Steve Rudd, whose duets as the Prince’s were constantly crowd favorites. Outstanding in their roles were Annie Slade as Cinderella, Tricia Spence as the Witch and John Greene, whose deep operatic voice was well juxtaposed against the rest of the cast. The piece was well placed on the stage and with minimal scene changes the action still remained exciting to watch. The best performance of all must go to the production team however. Sound, lights, set and direction all working together so effectively that it was almost impossible to be bored by this production – a credit to the team of Rick Trevaskis for direction, Ross Curtis for music,
David Lampard and his team for sets and costumes and Laraine Wheeler for lighting design. A very long show with lots of content, that could easily have been too much for the audience, with the show finishing over 3 hours after it begun, but despite its length a great night of theatre.