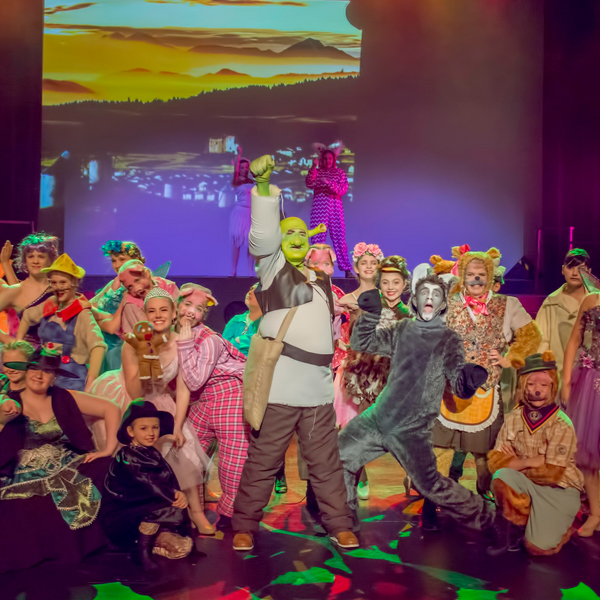 In the midst of a sweeping heatwave Adelaide Youth Theatre’s latest production, Shrek the Musical, still delivers – the experience only slightly dampened (pun intended) by the sweat rolling down the faces of the audience. This tight production under direction from Thomas Brodie Phillips is both exceptional and hilarious.

Strongly led by a finely-tuned orchestra under the stewardship of conductor Jennifer Trijo, it is clear that considerable effort has been invested by both musicians and performers alike. Trijo’s debut as a Musical Director is a resounding success.

In the titular role of Shrek, Ray Cullen has us laughing at his wonderful portrayal of the kind ogre. Cullen’s character development during the performance is a pleasure to watch. He has a nice singing voice but the Scottish accent wavers on occasion.

Rebecca Raymond as Fiona and Jack Conroy as Donkey both deliver A-Grade performances. Raymond, a beautiful singer, portrays a feisty Fiona balanced with key moments of vulnerability. Conroy’s Donkey is funny, full of energy and, at times, frustrating – a perfect portrayal.

Other stand out performances include Serena Martino-Williams’ vocal prowess as Dragon and Brady Lloyd’s devilishly camp portrayal of Farquaad. Lloyd’s characterisation strikes the perfect balance between ‘camp’ and ‘cruel’ and has the audience in hysterics. His movement on stage is extremely well choreographed.

Of note are Jasmin Teurlings as Gingy and Ryan Vandermyle as Pinocchio, both demonstrate beautiful singing voices. Vandermyle, one of the younger members of the cast, has a bright future in the performing arts. Teurlings interpretation of Gingy is reminiscent of the film, and brings back fond memories. Her performance is a highlight.

The show features some outstanding choreography by Shenayde Wilkinson-Sarti who has the performers moving with precision on stage; the large specialist dancing cast doing an excellent job. Show highlights include What’s Up, Duloc? and Morning Person which features a fantastic tap number with solos from Fiona and the Pied Piper, played by Kurt Benton. Freak Flag, a song that highlights the importance of one’s self-acceptance and that of those around you has exceptional dancing and the rainbow light display during the number reflects our country’s own recent significant changes.

This heart-warming story is ably performed by a wonderful cast to an appreciative audience. The entire cast and crew can be extremely proud of an amazing collective effort after pulling together this fantastic show in such a brief period.

Go and see it, it’s well worth it!

Where: The Arts Theatre