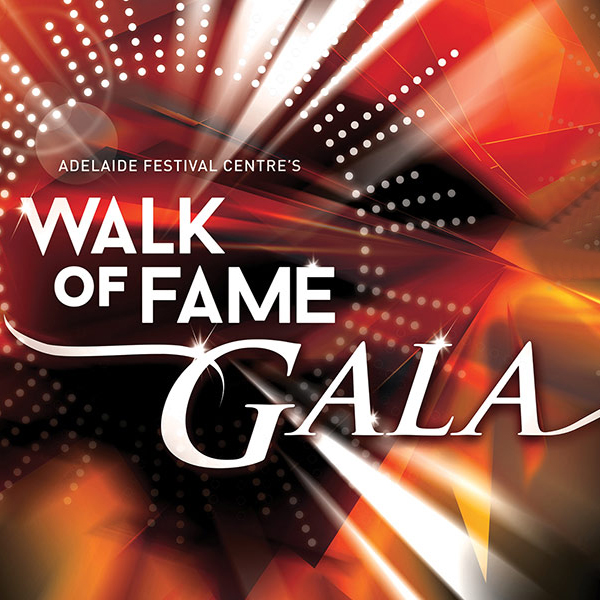 It was quite literally a landmark event at the Festival Theatre.

The Walk of Fame Gala celebrated the embedding of the names of 130 luminaries in the riverside plaza walk, those who have trodden the stage of the theatre over its 45 years.  It stands as a showbiz nostalgia salute which, with online voting for a large selection of stars, involved the approbation of much of the Adelaide citizenry.

Finally, the earthed stars had been officially revealed. Politicians made speeches and preened for photo ops with celebrities all glittering in the summer heatwave. The dear old theatre itself sported its deep new foyer carpets and the excited Walk of Fame Gala audience streamed in for a rousing variety concert to mark the day.

The use of big triangular blocks as stage setting, one dangling precipitously over the stage, had an oddly 70s aesthetic which made sense when it was explained that they reiterated the sail motif of the Festival Centre architecture.

In its way, the concert sang the old era, too; it was all very trad.

Jamie Goldsmith and the Taikurtinna dancers presented an arresting Welcome to Country in the half-light behind a spectacular art projection which featured the far-distant image of little Wright Island at Encounter Bay.

Then, in dramatic cultural contrast, there was Greta Bradman aloft on stairs, shimmering in a golden gown under a flare of blue lights. She sang opera from deep within the European tradition, Puccini, clear, high rich vibrato and very formal.

Not so with popular Todd McKenney who emerged as master of ceremonies, so full of beans that one felt he might almost pop out of himself. He teased the audience with a taste of Peter Allen and promised good things to come.

And the show rolled forth. Beccy Cole, in long black boots, did her beer-skulling routine and was hilariously self-deprecatory when not singing like a Country and Western angel. She’s a gem. She brought the house down.

The divine Nancye Hayes, in bright red slacksuit, belted out Broadway Baby and then a duet of You’re Getting to be a Habit with Me with her oft-times performance partner McKenney.

Children’s entertainer Peter Combe did his usual thing but with the wonderful onstage orchestra.

Slava Grigoryan’s exquisite guitar soothed the soul and was joined by Niki Vasilakis on violin with the Histoire de Tango and then, for something completely different, the lithe and muscular ADT dancers writhed and undulated in intriguing synchronous formations with a tall potted plant and an almost industrial soundscape. They were like verdant sprites. It was an excerpt of their Beginning of Nature program. It was mesmerising.

Rhonda Burchmore materialised, timeless and classic with her red hair shimmering in the lights. She and McKenney had a You’re the Best duet, McKenney still looking as if he wanted to burst into dance.

Adelaide’s most beloved actor Paul Blackwell had a tough call in the midst of the song and dance. Downstage and in Cockney character, he performed a period piece, a monologue about shallow but talented showbiz folk of the vaudevillian era. His description of the performing pigeons lady lingers in mind’s eye.

And the show rolled on with the splendid Zephyr Quartet amid the accompaniment.  James Morrison made the rafters ring with his beautiful mellow jazz trumpeting, The only off note of this historic gala was, oddly enough, from Tim Minchin who treated the audience to a new composition, a very long song called  If this Plane Goes Down. This unfunny, fear-laden song did not go down. His Matilda hit, When I grow up, did go down, however, and so did his duet of I Still Call Australia Home with McKenney.  Finally, with a big ending of Rio, McKenney got to release a bit of the pent-up physicality. Applause. Applause.

And Adelaide's Walk of Fame was official, ready to take new stars as they rise.

At its inception the Adelaide Festival Centre's Walk Of Fame included the following names: