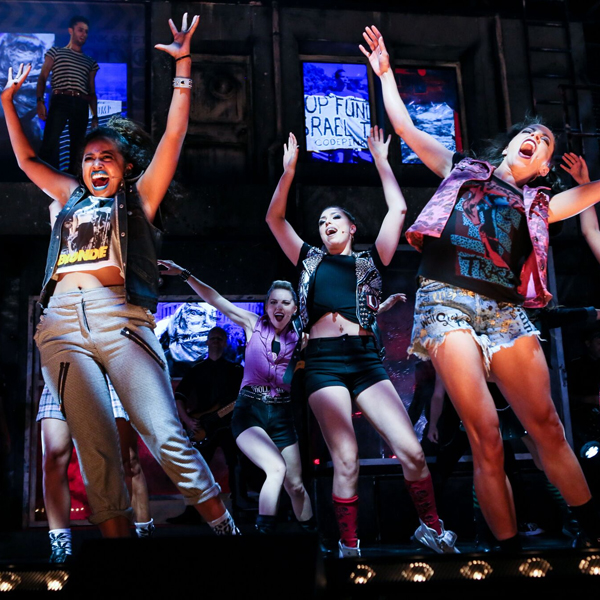 If it's kept you up at night wondering what ever happened to Danny Zuko and some of his Burger Palace mates after their appearances in Grease, this is the ticket for you.

The show should more precisely be entitled, (Don't Wanna Be An) American Idiot, although the trio of malcontented suburbanite protagonists come very close to it. American Idiot is the opening number and the title song of California's Green Day's seventh studio album which was released in 2004. The album, billed as a "punk rock opera" by band members Billie Joe Armstrong, Michael Dirnt (as in dirnt, dirnt, dirnt...dirnt-dirnt, d-dirnt), and Tre Cool, focused on Gen X's "disillusionment and dissent with the Iraq War" and other notable mistakes by the Bush administration. But as there is still more and yet again much disillusionment and dissent, the version you must absolutely see in the final week of January includes visual and verbal slings and arrows thrown at Trump. American Idiot was adapted for stage by its first director Michael Mayer and the band, played Broadway for a year starting 2010. It had its Australian premiere in Brisbane in February 2017, and Adelaide is the first stop on a national tour this year.

The production plays through breathlessly and continuously for one and three-quarter hours. While there is much to recognise from rock musicals and anthems of rock songs gone by (Springsteen and The Who come to mind), the music is enthusiastic and current, and charged with plenty of energy. Three suburban mugs (ostensibly living with unseen parents and motivated with malcontent modeled on the band members themselves) plan to break out to the big city - only two of them escape domesticity. Will (Alex Jeans) is willed to stay at home by pregnant Heather (Ashleigh Taylor). Tunny (Connor Crawford) is further disenfranchised by the daily news and ironically his way out is to join the Marines.

You will never forget his dream scene with Kaylah Attard's aerially outstanding acrobatics as the nurse trying to bring him back from the brink. Bravo! However, Johnny, furiously played by Linden Furnell, is our main tragic. Not long in the big smoke, he gets mixed up with two things: a gorgeous acolyte named Whatshername (Phoebe Panaretos garnered a Helpmann Award nomination from the Brisbane production), and heroin, absolutely awesomely personified by 2014 ARIA nominee Adalita. Bravo! (Billed as Johnny's alter ego, but I didn't buy that). The story is chronologically recorded by the date, which preface letters Johnny the junky writes home, so they are not really bad kids, just mixed up and dealing with their angst. The chorus is flawless and Dance Captain Kyla Bartholomeusz is personality plus (Lucas Newland - choreography). Ladies, you will love the gutsy female characters that put their men on notice with notable alacrity.

American Idiot didn't win Tony Awards for Best Scenic and Best Lighting Design for nothing. While you have everything to look at and hear from the cast, the colourful and sonically coordinated visual images, and the functional two-storey inner city slum set (Westside Story comes to mind) ultra-enhance the action (Craig Wilkinson and Josh McIntosh - video and set respectively). Glenn Moorhouse led a driving band of two guitars, bass, drums and keys. iOTA makes a video appearance. Although largely down-and-out, the characters wear the hippest in grunge (Melanie Knight - costume design).

You don't hand out roles like this to just anyone and Director Craig Ilott has assembled a highly talented and motivated cast. If you have punk in your veins, do not miss this show. If you don't, wear earplugs and see it anyway. Standing ovation on opening night. Bravo!

Where: Her Majesty's Theatre