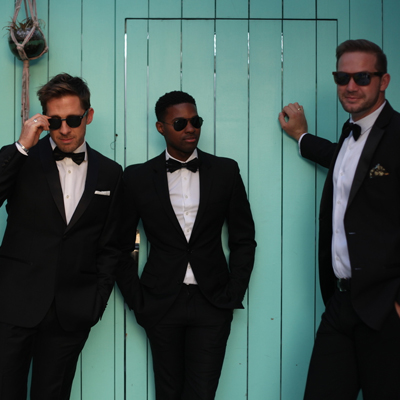 Stunning a packed house at the Grand Ballroom, the four handsome singers of the California Crooners Club are polished and deliver a solid performance; albeit, 20-minutes late to start.

Led by Adelaide’s home-grown star of stage and screen, Hugh Sheridan, the group at this year’s Fringe features new members TSoul and Connor Boatman – both from the United States. Returning for his third Fringe is the group’s soulful South African, Emile Welman.

Sheridan plays to his home crowd well, littering his performance with local references packed with funny quips. The entire group performs much of show from the floor, dancing and getting up and close with the audience.

With a set-list ranging from the 50s to today, the audience is treated to near flawless vocals. A highlight is the wonderful mash-up of Frank Sinatra’s New York, New York and Jay Z’s Empire State of Mind.

There are moments where the vocals sound tired, but this does not detract from the overall outstanding performance. The tight harmonies thrill the audience. In this group, Sheridan has found an incredible balance with each voice perfectly complimenting the others.

Newly minted Club members TSoul and Boatman are very impressive. Boatman, dubbed “Millennial Spice” by Sheridan, has a subtle tenor voice and provides a pleasant contrast to the heavier sounds.

Sheridan’s new song Dreamers is also a hit with the audience.

Not one moment of the performance leaves the audience wanting.

Where: The Grand Ballroom at Hilton Adelaide