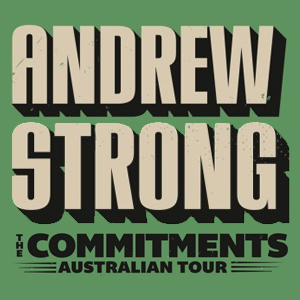 I can’t say I’ve ever really been a follower of cover bands, and can probably count the number of times I’ve seen one on one hand. I can appreciate what it is that they do, and admit that it is nice to sometimes hear a cover version of a loved track, but on the whole, cover bands are not my thing.

Unless, that is, the cover band does something special with the music they’re playing, breathing new life into it and putting their own spin on proceedings. And that, I am pleased to note, is where Andrew Strong and his band of Commitments fits into the musical sphere.

Irish film ‘The Commitments’ is definitely one of my all-time favourite movies, and like so many others who were enchanted by the film about a bunch of Irish misfits who get together to play black soul music, I was quickly charmed by the sensational vocal abilities of Andrew Strong, if not by his boisterous character Deco. In the film, Deco was a bit of a tool, but thankfully that’s not a trait that Andrew Strong shares in real life, and his stage prowess outshines anything his character could have done! So needless to say, I was pretty happy when I heard that Andrew had put together a band and a tour to celebrate the 20th anniversary of The Commitments, and am even happier that ‘Andrew Strong: The Commitments Tour’ paid a visit to our fair city!

As you may expect, the packed crowd at the Gov were of the slightly more seasoned variety, likely a mix of those old enough to remember the film and lovers of the original soul music of the ’60s and ’70s (or both!), but despite the average age, there was plenty of energy in the room! And things reached fever pitch as Andrew came out on stage, joined by a couple of horns, a guy on keys, bass, drums and guitar, and his sister Niamh on backing vocals. All suited in slick threads, they kicked things off with the classic ‘In The Midnight Hour’.

From there, it was a virtual battle between Wilson Pickett and Otis Redding tunes, playing off numbers like ‘Hard To Handle’ and ‘Land Of 1000 Dances’, mixed in with plenty of other soul standards like Joe Tex’s ‘Show Me’, vocal acrobatics on James Carr’s ‘Dark End Of The Street’, and Roy Head’s ‘Treat Her Right’, complete with a mix of change-ups to keep the crowd guessing with their participation and singing, while also showing just how tight the band can be! Andrew’s sister Niamh took centre stage for tunes like the Aretha Franklin pair ‘Chain Of Fools’ and ‘Never Loved A Man’, demonstrating that vocal talent runs in the family! The band was pretty impressive too, with some great Hammond sounds coming from the keys, super soulful sax playing and fat bass, topped off with Andrew’s guitar soloing prowess showing his multitude of musical talents.

Late in the set, Andrew introduced a new song, which ended up being the infamous ‘Mustang Sally’, much to the crowd’s delight, before proceedings closed with a killer cover of Spencer Davis Group’s ‘Gimme Some Lovin’’, with a finish that never seemed to end and bringing things to an almighty climax!

The first set may have been over, but that wasn’t it for the night, with the band returning for some great versions of James Brown’s ‘I Got You (I Feel Good)’, a sensational metal romp with Hendrix’s ‘Fire’, and finally ending on a high with Otis Redding’s ‘Try A Little Tenderness’.

Without a doubt, Andrew Strong still has that voice, and the music has remained ever as enjoyable all these years later. What a fantastic show, even if it was full of covers!

When: Closed
Where: The Gov
Bookings: Closed