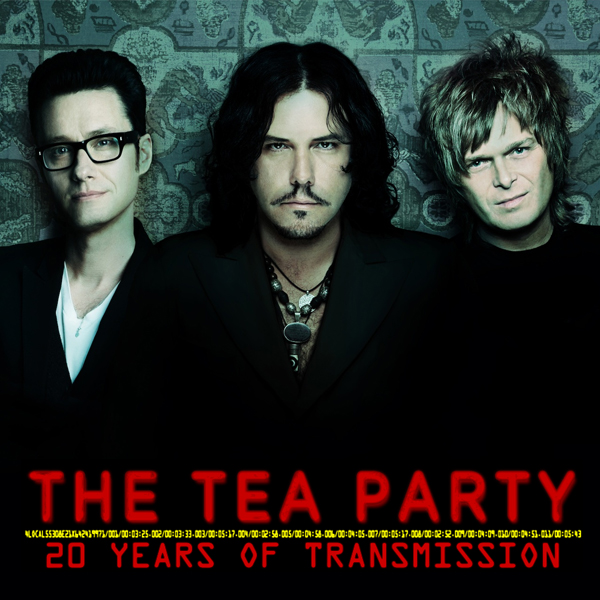 It’s no secret that Canadian trio The Tea Party are one of my favourite bands. In fact, of all the bands that are currently in existence, they would probably be number one! So it’s needless to say that I am pretty pumped to witness them grace the mighty stage of the Thebarton Theatre once again to celebrate the 20th anniversary of their killer transitional album, Transmission.

The album followed in the footsteps of the band’s breakthrough Edges Of Twilight, and saw them experimenting with electronica and the sounds of the Middle East more than ever before. There are more than a few awesome standout tunes and live favourites thrown into the mix.

It was not too long after the release of this one that I started to get into The Tea Party, dabbling a little while still in high school, and interested in the synergies with Led Zeppelin. Within a few years, I was a full blown fan, and I’m pleased to have had Transmission on high rotation on my stereo ever since.

With the first set of the night due to be a recital of the full Transmission album, where would things begin? Would the band play through in the normal track order, or would they change things up a bit? It’s The Tea Party, and one never really knows what’s coming next (singer Jeff Martin’s remarks during the show are certainly true!), it only adds to the anticipation.

With an album full of light and shade, and plenty of ethereal sounds of the East, there are lots of good starting places, but tonight, it is with the thumping Army Ants, a riotous riffing tune perfect to get the blood pumping. A quick bit of Zeppelin’s Wanton Song intro gave way to equally pumping Babylon, before the first of the melancholic tunes with Psychopomp taking us not into the shade, but into full-blown darkness.

The journey further to the Zeppelin-esque East continues with Gyroscope, and into a live rarity in Emerald. Even the band remarks it is only one of a handful of times they’d played the song live. Alarum and Release balance each other before they launch into one of my faves, the epic Transmission.

Pulse and Aftermath bring up the rear of the set, before it all ends with the obvious choice, the sensational Temptation! The whole crowd is on their feet, joining in and bringing things to fever pitch!

With the Transmission album played in its entirety, there is a short break before things ramp up even further, with the iconic thumping drum intro to The River blasting out and announcing the beginning of the second set. This is such a cool song that gives the band loads of flexibility to incorporate all sorts of interludes, and before long the familiar River tide gives way to Zeppelin’s Dazed And Confused - about as good as it gets without Jimmy Page on stage!

Not content to leave it there, a few bars of Tool’s Sober find their way in before the River gives way to the sea. Another Tea Party epic, The Bazaar follows, before really heading into the deep blue with the massive Ocean At The End, from the band’s last long-player of the same name.

Sadly, my wife Kathleen couldn’t join me at the show, but Jeff and Co. still play one of her favourites, Heaven Coming Down, this time adding a bit of U2’s With Or Without You into the mix in truly perfect style. U2 couldn’t have topped that! With plenty of jamming taking place, the second set starts to draw to a close, with a massive rendition of Save Me, where literally every crowd member screams the iconic chorus line to the delight of the band.

A quick sojourn from the stage precedes the expected encore. After all, they hadn’t played my favourite Tea Party tune yet! Jeff returns solo on the guitar for Zeppelin’s Black Mountain Side tribute, Winter Solstice, before things erupt into my all-time favourite, Sister Awake. An epic tune on its own, complete with different movements in the original album track, lending itself beautifully to incorporate other tunes along the way; we are treated to sections of Paint It Black and even a bit of Bowie’s Heros, before returning to Sister and finishing on a massive high!

As usual, The Tea Party satisfies 110% in what proves to be a killer show! They promise to be back again next year… perhaps with a Triptych celebration, perhaps just with a best of, who knows; either way, it’s sure to be sensational, and I can’t wait!