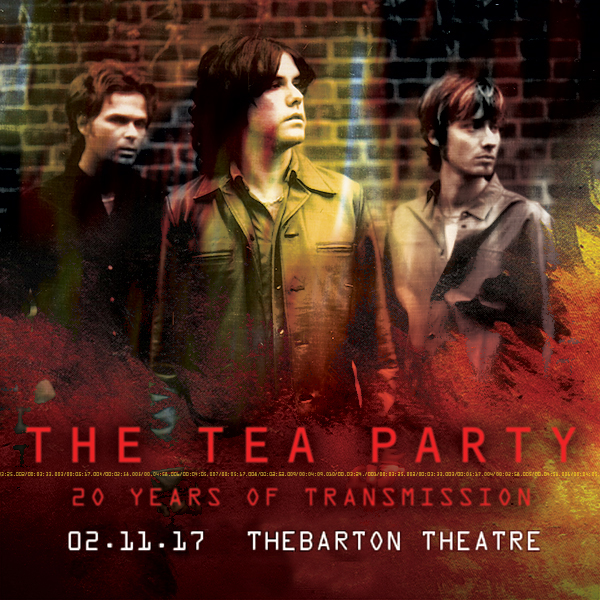 As a music lover, there are lots of artists and albums that I rate highly, yet interestingly there are relatively few that occupy the status of being ‘favourites’. Among others, my favourites include names like Led Zeppelin, Soundgarden, and a little Canadian trio called The Tea Party! I’ve long been a fan of these guys, and have the great fortune of catching them play, as well as a host of other acts that front man Jeff Martin has put together, many, many times. Every time they return, I’m just as excited as the first time I witnessed them all those years ago.

It seems that at the moment, lots of past acts are either doing reunion shows or tours celebrating past releases and the like. On face value, The Tea Party seem to be doing something similar, as they tour to celebrate the 20th anniversary of their awesome fourth album, Transmission. But then you realise that unlike so many contemporaries running the cash-in cycle, The Tea Party actually reunited quite a few years ago after a hiatus and have released a few albums in that time too, so this tour really is a celebration; and what an album to celebrate!

Opening with the sensational party-starter Temptation, things go from strength to strength. As a big Tea Party fan, I’ve followed them on their musical journey and each album is a new path on that journey, a definite progression through the musical ether.

Transmission builds on their earlier releases, Splendor Solis and Edges Of Twilight, but is somewhat heavier with Eastern influences and more electronic sounds than we’d heard before. Tunes like the aforementioned Temptation, the mellow Eastern-progressive Psychopomp and Release, thumping Gyroscope or Babylon, and the massive epic title track still get my heart pumping two decades on.

Not only are these guys touring, but they’ve also re-recorded the album’s biggest tunes - Temptation, Psychopomp, Release, and Transmission - released them as an EP, and also produced a coffee-table book retrospective of the Transmission era. Like Big Kev, I’m excited!

The Tea Party are set to play Thebarton Theatre on Thursday November 2nd. They’ll be playing Transmission in full for their first set, and will be back for more Tea Party goodness in what is sure to be a killer second set too! See you there!