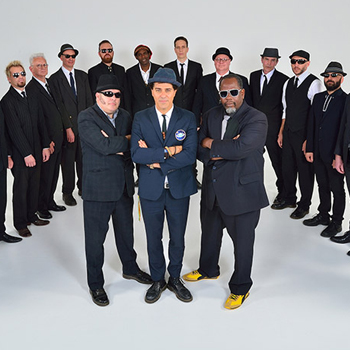 If you’re going to do something big, you may as well make it huge… I’m sure that’s the motto that Melbourne-based musical genius Nicky Bomba was working from when he put together the Melbourne Ska Orchestra a few years back.

Bomba had garnered a nice little name for himself doing solo stuff, working with his band, and playing drums for John Butler, but it’s been with the massive MSO that things have really lifted to a new level. A few albums in, each successive release builds on a solid ska base, paying tribute to what’s gone before, and carving a new groove in the ska backbone. In 2018 however, Nicky and the crew decided to outdo themselves by releasing a new tune each and every week for the whole year! Now approaching the half way mark, the band has released the entire first quarter collection of 13 tracks, each a unique MSO take on a classic ska tune. It is in celebration of this release of Ska Classics that MSO decided to head our way on tour.

It is a chilly night as I head to the Gov, but it doesn’t take long for things to start heating up. Local band Lucky Seven are first up, and the septet kicks things off in fine style. With their own take on swing jazz, the crowd is quickly aroused when the band takes to the stage, and it is only moments before the swing dancers hit the dance floor to dance the night away in fine style. With a beefy horn section, great rhythms and smooth vocals, these guys really know their craft and are a perfect prelude for what is to come.

After a great first set, the local crew make way for the behemoth of the Melbourne Ska Orchestra. Lucky’s seven members did a good job filling the stage, but it is really something else to see 19 of Melbourne’s finest cram and shoehorn themselves in! As usual, they make an impressive entrance from within the crowd, each wielding his instrument of choice, and Nicky Bomba brings up the rear with his megaphone. By the time they all make it on stage, the first tune is well underway, and the sell-out crowd is amped up to the max!

Things don’t let up. There is loads of crowd participation, Nicky’s usual banter, punters dancing and skanking throughout, and of course, plenty of fine, fine ska!

Celebrating the release of Ska Classics sees plenty of those classic tunes played, with favourites like Prince Buster’s Al Capone (which my wife points out is the basis for Boney M’s Baby Do You Wanna Bump – you learn something every day!), ska originators the Skatalites’ Confucious, Toots and the Maytals’ Monkey Man, the Wailers’ Simmer Down, and the I-Three’s Feel Like Jumping (which I reckon sounds remarkably like Toots’ 54-46 Was My Number, but that’s just me).

The band throws in a couple of well-loved new wave tunes too, with the Specials’ Message To Rudy and Madness’ Night Boat To Cairo, the latter of which has just been included on an international ska collection. There are a few tunes from the band’s second quarter collection of one-song-each-week, including the theme song from Austin Powers, as well as a bunch of MSO favourites, like Lygon St Meltdown, He’s A Tripper, Sly Boots, The Best Things In Life Are Free (where Nicky makes a return to the drums), and crowd favourite, the theme from Get Smart. There’s plenty of opportunity for swaying and skanking, singing and beat-boxing, and for soloing and all way through, we’re having a blast!

The main set sadly comes to a close after a solid couple of hours but the crowd refuses to let them go. The band is only halfway through exiting the stage when they come back for a few more, culminating in the Bomba classic Automatically Man, which rounds out a sensational night of music!

Nicky promises they’ll be back again soon, and in the meantime, there’s always a new song to enjoy each week!

Where: The Governer Hindmarsh