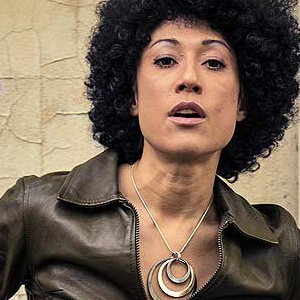 A piercing shriek of gravel voice and Betty Davis is reborn on the Adelaide stage. One of the ironies of showbiz is that an elegant performer such as Cecilia Low shouldn't be embodying such a coarse, raw and raucous performer. But that's show biz. Low can do it and Low  believes that the funk rock fusion queen deserves to be remembered.

The Cabaret Festival audience clearly agreed, responding to her performance with its own stridency of whistles and whoops and two songs' worth of dancing around their tables in The Space.

It is a well-conceived show, something of a rock spectacle. Low is backed by a fabulous band which recreates the Chambers Brothers and many of the musical characters of the 70s wherein Betty D's flame burned so fiercly.

She dated Eric Clapton, was friends with Jimi Hendrix, recorded with Sly, Santana and the Pointer Sisters and was married to Miles Davis. She wrote and arranged her own music. She had a screeching instrument of a voice like no other. One inwardly flinches at the vocal exertion it takes to emulate it. Brave Low. But she's not just a performer and trained singer. She's a BettyD fan.

Low has written the show as an homage as well as entertainment. In realising it, she is joined on stage by the sublime Eliza Wolfgramm and vividly backed by musical director Tony Kopa with an out-there 70s-style band featuring, among wonderful others, Phil Ceberano.

The show presents its very different format from the outset. As the audience settles into the room, Kopa, in a huge shock of Hendrix hair, warms the house up with music and a bit of atmospheric ham from the band.

Low struts in complemented by simultaneous video and her story begins. The video, both live and recorded, tries to give a 70s spirit and also a sense of an offstage world.

BettyD was known for her skimpy costumes and Low's fine, athletic figure showcases them well - tiny shorty shorts with long boots or black satin teddy and garter. She doesn't so much dance as gyrates her way through a myriad of highly sexual poses.

The life story emerges, sometimes in pure narrative breathily delivered to a kiss-close hand mike, sometimes as snippets between songs.  Captions on the back projections add further context - and dates to identify where in the drug and sex-fuelled 70s we are.

There is a certain looseness to the production which gives it a sense of spontaneity. And there are a couple of dramatisations, one of which pits Low against Wolfgramm, like two cats brawling over a Tom. After all, there are no pretences of respectability in this show. It is rough and edgy and very loud indeed.

It is also a nicely-created time capsule which not only gives a memory trip for the oldies but a music history lesson to the youngies. It goes down wildly well with both.

When: 19 to 20 June
Where: Space Theatre
Bookings: Closed