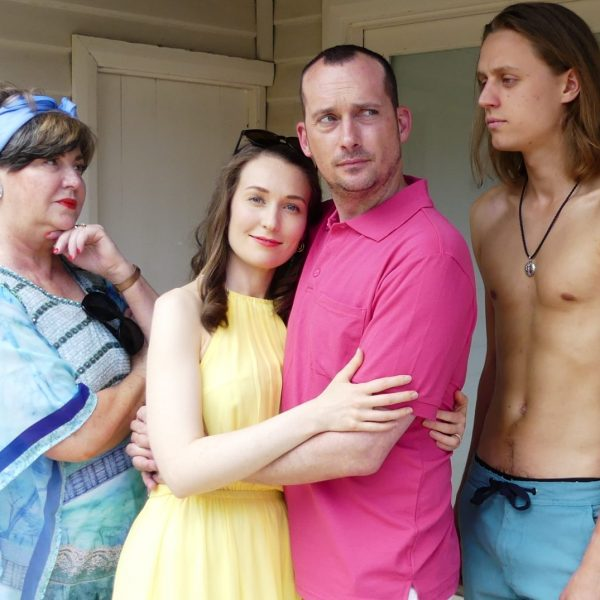 Blue Sky Theatre company has a very devoted following. Dave Sims knows how to mount real audience-pleasers. They have been mainly classic old school costume farces performed out of doors in wonderful garden settings aligned with the fabulous opengardens.org.au .  Hence the name “Blue Sky”, one supposes, albeit the performances progress into the evenings under lights. Blue Sky picnic outings have achieved an almost cult-like return of audiences to see lavish and hilarious productions of the likes of She Stoops to Conquer, One Man Two Guvnors, The School for Scandal, and Present Laughter. Some of us are still laughing. And raving about the impeccable costumes. It has been a five-star path for this company. It is scheduling The Scarlet Pimpernel in the garden when 2022 becomes more clement.

Winter and common sense have driven the company indoors for some productions which, brilliantly, are timed as 4pm matinees at the fabulous Marion Culture Centre’s Domain Theatre.

But, for some unfathomable reason, our man Sims has abandoned the comical costumed fun and games and mounted a very earnest play indeed.

Too Much Sun was written by London-based American Nicky Silver, and one reads in the program notes that his writing has been compared with that of Joe Orton and Oscar Wilde.

That is not going to be happening from this critic.

If ever there was a case of incredibly tedious overwriting, this play is it. Not much sun at all. It is a pretentious, unsubtle, and didactic work which one feels actually does a disservice to gay theatre. The dialogue? Oh, save us from reiterated clichés and predictable outcomes.

Luckily for Blue Sky, ingenuous new theatregoers are loving it. Their foyer talk was describing it as “deep”.

It tells of a vain and ageing actress imposing herself on her alienated daughter’s holiday house when things are going badly for her in a production of Medea at Wagga Wagga. Yes, this, in itself, is gorgeously funny. Sadly, not so via the Silver script which could use a mile of kindly blue pencil to soften its abstruse reiterative verbiage.

So, selfish old actress skews the seaside social world while her awful writers-blocked son-in-law ignores his marriage and the sweet surfie dope dealer seeks panacea from the trauma of losing his mother. Everyone has issues and, in case the audience is not recognising them, the dialogue labours them. Attempts to balance the plot with humour are clumsy. Despite their best efforts, the actors are pushing the proverbial uphill.

Yet, they manage to achieve some decent performances, particularly Celine O’Leary as the old prima donna mum who delivers a very substantial and credible character development. Jackson Barnard has a lovely languor as the weed-selling surfie and it is incredibly refreshing to see a handsome young actor whose body is unmarked by tattoos. Lee Cook is a consistently capable actor and holds his own easily as the lousy writer while Emily Currie, is surly and impassive as his comfort-eating miserable wife. Reuben Fernee, as the quivering production messenger, works hard to make things funny and there are moments. Meanwhile Stuart Pearce is solid as the nice but troubled man next door.

Dave Sims is a great director but one is simply baffled by his choice of such a leaden play.

Never seeing it again would be too soon.