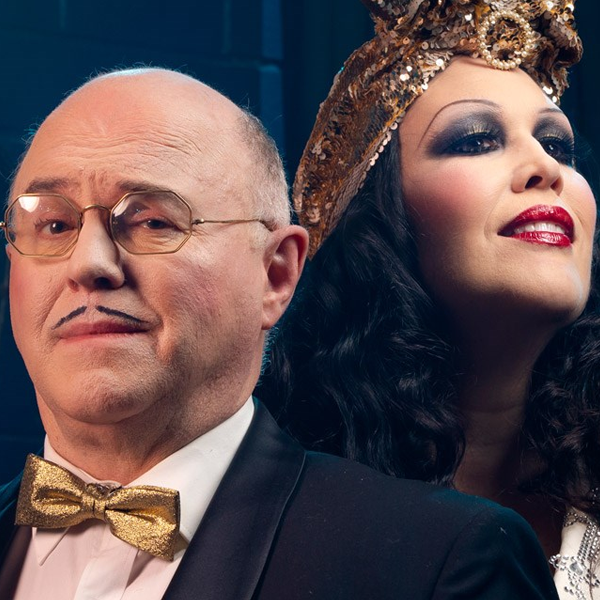 Turning back the clock to the good-old, bad-old days which were just like these days.

The 1930s had been an era post- plague, featuring the Great Depression and the rise of Naziism.

So, in a perchance sleazy night club, not very co-incidentally named the "Corona Club", the entertainers entertain in what seems to be a romantic reunion.

The entertainers are embodied by the fabulous Phil Scott with Catherine Alcorn, who makes up for Phil’s sleek pate with a couple of wild wigs and even a striking Statue of Liberty spiked tiara. Not that the American Speakeasy theme oppressed. It was set in Kings Cross with lots of references to Queanbeyan.

The patter between the two entertainers is a litany of groan jokes, not the fierce wit one expects of Scott, but a very different theme. One could barely expect two sentimental old has-beens to be on the current topical zeitgeist. That is not this show.

The big drama here is the expectation of a police raid for illicit drinking. It’s the 1930s, don’t forget.

Alcorn does some physical comedic shtick, downing the champers and falling off the chaise. She belts out big numbers and works the front row for a bit of audience participation.

Scott, meanwhile, does his peerless twinkle-fingers on the piano in both serious and amusing contexts.

And it is Scott who steals the show with two mighty numbers: movingly, Brother Can You Spare a Dime; and, oh, wild cheering applause, resoundingly Fats Waller’s heavenly glorious Your Feets Too Big.

The band, set on a nice mezzanine, is a joy. Rob Chenoweth is blow-away brilliant on the trumpet, Thomas Waller natty on the drums and Oscar Peterson (yes his real name) on bass.

There was a spot of grief with the sound on Saturday night. It felt-over-amped and gave a rough edge to the timbre of the voices.

And, oh so disappointingly, the Cabaret Festival did not see fit to set The Space in cabaret configuration for this cabaret show.  Why? There were just some mysteriously VIP tables right in front of the stage with the rest of the audience perched in bleacher formation.

The old days of CabFest winter champagne cheer are gone, it seems.

The bubbly is outside in the cold, if you want it.