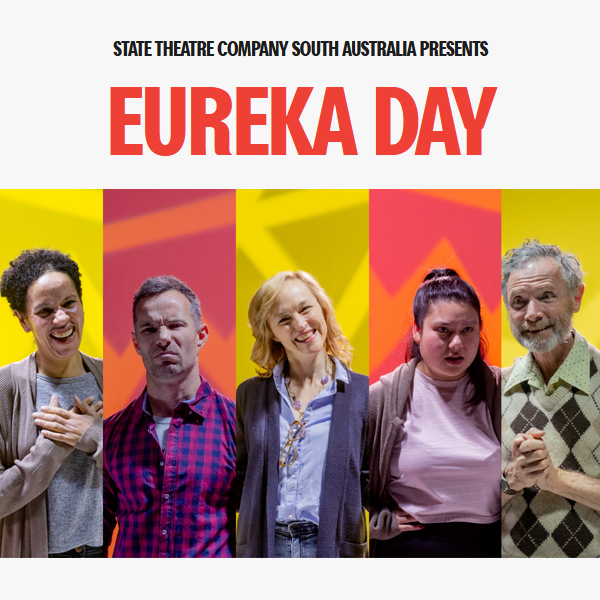 If we needed a covid tonic, here it is: gusts of glorious laughter as the battle between vaxxers and anti-vaxxers unfolds in an alternative community school in Berkeley, California.

State Theatre’s programming of Jonathan Spector’s Eureka Day was an act of perhaps unprecedented prescience since the play was slotted into the 2021 season long before the pandemic immersed us. It is not about Covid but about a school board’s response to an official medical edict when a case of mumps breaks out among the students.

The school board is a politically correct feast of ethnic diversity and is, oh, so ardently woke. Indeed, it is contemplating ever more specific racial sensitivities such as “inter-racial adoptee”.

Californians always did take self-righteous alternative nuttiness to the passionate extremes of irrationalism and Spector has written their desperate neediness into a swiftly-flying narrative which opens with ruthless parody and, after some genuinely thought-provoking revelations, arrives at a denouement of comfortable irony. It is a lovely exposition of oppositional logical processes, albeit over-peppered with unfinished sentences which hang in the air.

The play is set in a primary school library, well observed by designer Meg Wilson to feature all the clichéd refinements down to those impossible bean bags. The board meets there in well-spaced chairs, occasionally sharing scones which can only be served on environmentally correct plates.

Don is the senior, the facilitator, the chair, the socks-and-sandals softie who likes to close meetings with meaningful readings of esoterica from Rumi. Glynn Nicholas embodies this man with absolute perception and impeccable comic timing. It is as if he was always meant to play the part which even encompasses a soupçon of mime, expertly reminding audiences of whence came this fine stage presence.

Don is very much under the thumb of domineering, manipulative, and highly strung Suzanne, a stereotypical “Karen" of insistent alternative beliefs. Caroline Craig makes a meal of this character, sometimes so frenetic that it is exhausting to behold. Yet, in a solitary pause in her annoying hyperactivity, she presents an expression of such profound vulnerability and defeat that it may never leave the mind’s eye of this audience member. That is acting.

In contrast is single mum Meiko, played by Juanita Navas-Nguyen, is quietly inscrutable as she sits knitting. She has secrets to keep but when her time comes, she is a powerhouse of agendas. Matt Hyde plays Eli, ever with a somewhat dazed look in his eyes, either because he is a two-timing hypocrite or because he is riding high on the zeitgeist of wokeness. Even in tragedy, he is somewhat unpleasant but apparently very rich.

Into this group comes the new board member, Carina, an African American lesbian mum with a special needs child. She would be perfect for the board’s diversity, except that she reveals herself to be rational. Sara Zwangobani is pitch-perfect in this role. She is a joy to watch, nuanced in character interpretation and, of course, on the side of the angels when it comes to an informed and mask-wearing State Theatre audience.

The high spot of this work is very high indeed. As Don takes to the Internet to confer with the school community on the issue of vaccine mandates, a dropdown screen plays out the text conversations and comments of the participants which soon become a deluge of wacko anti-vax theorists versus exasperated dissenters.  It is one long, heavenly, and much-needed belly laugh.

Thus, with a fabulous cast in the hands of Rosalba Clemente, plus slickly professional lighting from Mark Shelton, fine audio-visuals from Chris Petridis, not to mention well -coached American accents, this production with its serendipitously pertinent subject matter, is a top notch hit show for State.