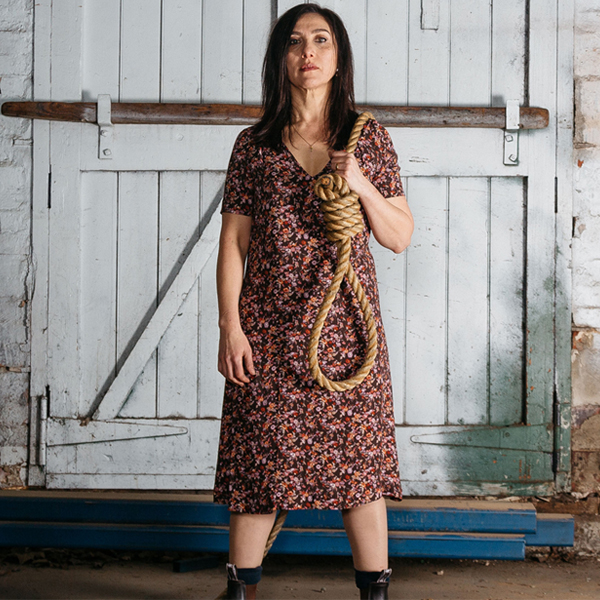 There is no outside world. There is no covid, albeit covid seating in the darkness of the Tandanya Theatre.

There is only one reality and it is ghastly, ghostly, grotesque, and yet sublime.

The Bleeding Tree is a sensationally brilliant piece of contemporary Australian theatre and its creator, playwright Angus Cerini, sits up there in genius territory.

This is a work unlike anything one has ever seen in the vast diversity of theatre.

It is a huge black poem.

It is exquisitely penned, deeply complex, rich and yet voiced from the coarse tongue of the underclass.

It is a tale of the last straw. A mother and two daughters dwelling somewhere, nowhere in a parched, remote Australian flyspeck town, have lived their lives beaten and abused under the brutal thumb of a violent drunk. One night, he rolls home in yet another thuggish and vindictive rage and the three women rise up and kill him. One daughter “knocked his knees out”. One “conked him on the head”. And, the mother “shot that house clown through the neck” with a shotgun. “I think your father’s dead,” quoth she.

And then, the psychological and social reverberations of this justified crime all are expressed through the three women, either in the voices and characters of visiting outsiders or in their own troubled triumph.

Thus do the actors segue with seeming ease through the transitions of time and character, voicing the contrasts with striking credibility. While Corey McMahon’s excellent Theatre Republic cast carries the interchanges of characters with artful conviction, in the end of the day it is the script they are “gifting” to the audience.

Therein, Cerini articulates the characters in wild and wayward rustic tense and grammar and in literary lyricism which does not compete with the country culture he is depicting. It is potent, poetic, profound, and yet devoid of pretension. One is immersed in wonderment at the nightmarish black beauty of it all. One even sheds a tear or two at moments of surprising poignancy.

There is no playwright to whom Cerini can be compared. This play is something unique and it deserves the many awards it so far has attracted, and then some.

Cory McMahon has taken this extraordinary literary phenomenon and given it the calculated unhurried pace it needs to liberate the beauty of its macabre poetry.

The audience barely moves a muscle, so stilled is it in focus on such an unusual experience.

It emerges from the tight 55 minutes bursting with commentary on the ugly wheres and hows of domestic violence and why is it that so often, especially in Australia, the rationalisation that it is not one’s business means the no one intervenes until it is too late.

This production is a triumph for director Corey McMahon and also for the cast: Elena Carapetis as the exhausted mother with Miranda Daughtry and Annabel Mattheson as her haplessly complicit daughters.

Not only but also, composer Jason Sweeney taps into the ether of pure excellence with a soundscape which is beautiful, subtle, and apposite.

This has been a much interrupted production thanks to the perversities of Covid19 but it now emerges not only as worth waiting for but as an award-worthy and unforgettable theatrical sensation.