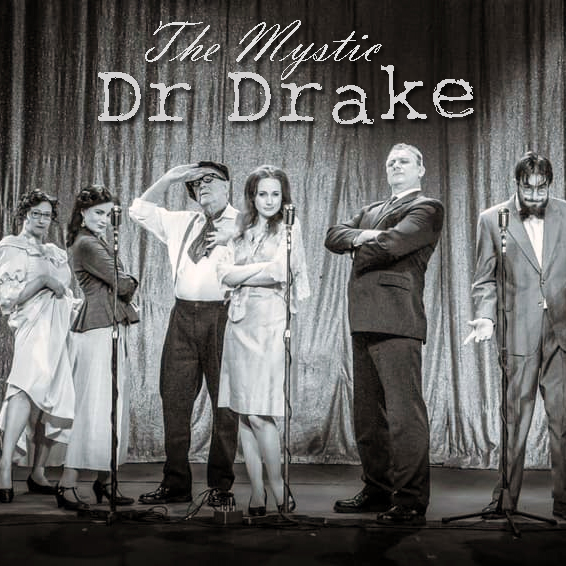 Here comes the trusty old Rep joining the line-up of companies which have mastered the art of entertaining their audiences while under the constraints of the Covid pandemic.

And, it is a bravura confection it has devised.

The list of companies who have worked this covid-era theatrical miracle is short.  State Theatre of SA with ActNow heads the bill with their sensational, groundbreaking Decameron series, Zoom Theatre of the UK, The Project in the US, and Cancelled, the FB mini-series have led the way into the history books.

And now The Rep.

The Rep has done its own thing.

Reminiscent of its annual stage melodramas, it has produced a wild piece of absolutely cornball retro murder mystery.

Adelaide playwrights Warren McKenzie and Carli Stasinopoulos are the co-creators of Dr Blake, an heroic crime-fighter who is a paediatric surgeon by day and by night a detective with supernatural powers.  His colleague, sort-of assistant and would-be love interest is a newspaper reporter called Lois Hanley. In each episode they are confronted with a murder most foul with villains hell-bent on stealing secret weapons, inheritance, or even love. They are as utterly dastardly as the good doctor is mystical and pure.

The tales are presented as radio plays with a row of microphones on a stage and, beside them, two sound effects operators, Mikayla Bishop and Kaityn McKenzie, along with musical accompanist, the inimitable Sandi McMenamin. There are special FX sounds of footsteps, pouring champagne, fire, rustling papers, and you-name-it. McMenamin heightens the suspense with melodramatic overtones or plays tinkling carousel-style backgrounds for the regular "sponsorship intermissions", funny old faux ads that they are.

As director, Warren McKenzie has assembled an extremely able ensemble for these plays.  Brenton Whittle, Joshua Caldwell, and Nicole Rutty are the best known names with James Black, Brittany Daw, Laura Antoniazzi, Leighton Vogt, and Aled Proeve. In each episode they play different roles, keeping the whole thing bright and fresh and fun. Scripts in hand, they take one back to the days when repertory radio drama was the mainstream thing, when directors like Stafford Dyson were feared and revered in the ABC radio studio in Hindmarsh Square, when actors such as Ron Haddrick, Iris Hart, Myra Noblett, Margery Irving, Yvonne Hutton, Les Dayman, Len Sweeney, Thelma Baulderstone, and even the young Don Dunstan and John Bannon regularly stood behind the mikes.

From McKenzie’s 2020 cast, there are some delicious performances. Indeed it is good humour, lively characterisations, and fulsome nostalgic aptitude all-round. The actors seem to be loving every moment. Overacting and American accents are de rigeur. And, while it is not a formally-costumed production, the cast members all wear attire suited to the character of the moment. It all works rather well. In fact, the whole exercise, lighting, camera, and sound included, works very well indeed.

It is a gloriously zany and imaginative romp. It also is a gently satirical nod to theatre history and, as such, it is a credit to The Rep.

Since The Rep’s future is core to the intent of the Virtual Theatre, one is encouraged to make donations for the theatre’s much-needed upgrades here:  adelaiderep.com/support-the-rep