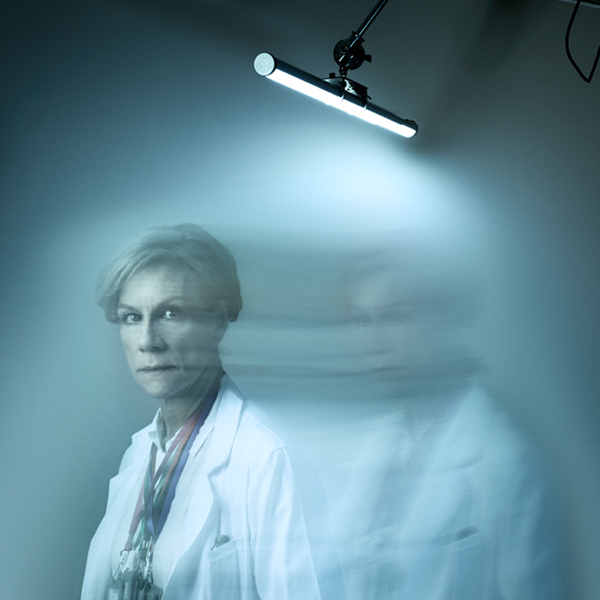 Applause does not come instantly as The Doctor’s cast line up for the curtain. The audience is suspended, still in the grip of the play. And then it leaps to ovation. What a tour de force by an actress! What a mighty beast of an unsettling play.

The Doctor is an English work that has been “very freely adapted” by its director Robert Icke from  Professor Bernhardi,  a 1912 play by Viennese doctor/writer Arthur Schnitzler. Then and now, it is a play about medical and religious ethics. And, in its modern incarnation, it is a searing indictment of a society overrun with political and moral agendas, a world of endless self-righteousness and inflexible beliefs. At the end of the day, the play’s primary message boils down to a single word: “compromise”.

It is staged with eloquent austerity, with a vast curved wall and, centre stage, a lone trestle table and benches which rotate ever so slowly to the accompaniment from aloft of subtle but highly articulate percussion from drummer, Hannah Ledwidge. Centre rear sliding doors open onto the corridor world of a busy hospital, doctors in white coats hurry to and fro and converge around the table in meetings with Professor Ruth Wolff, The Doctor. The issue is the impending death a teenage girl with sepsis brought on by an incomplete home abortion. Wolff obstructs the entry of a Catholic priest summoned by the girl’s parents to give last rites. Wolff is in authority and believes that the priest’s appearance would shatter the girl’s sense of hope and panic her into a fearful death. Wolff is a secular Jew adamantly dedicated to science and her role as a doctor and she has no time for any form of religious claptrap. And so the issue of rights erupts. The medical staff divide on religious grounds and thence on racial grounds. Wolff sticks to her guns. The girl’s grieving father, utterly agonised in the genuine belief that his daughter has ended up in purgatory, swears revenge. A hospital corridor confrontation becomes a media focus. Suddenly, identities slide sideways and characters who were white are now identified as black and male becomes female. And the audience must juggle these unlikely switches along with bioethics and conflicting moral certitudes. A disgraced Wolff must defend herself to a smug panel of self-righteous minority groups: right-to-lifers and religious scholars. There’s quite an enlightening lecture on the “woke” movement from one of them. They want her to compromise her beliefs and her identify while they, of course, will never give sway. Audience members writhe in their seats, containing the urge to speak out as they witness the slaughter of sacred cows.

It is riveting theatre, both in its cerebral content and in its sublime production. It is what festivals are for. Not that we don’t have wonderful theatre here, but this is a major work with a massive cast. It is creme de la creme. As for Juliet Stevenson in the principal role, hers is a performance of the most profound power and commitment. She commands the stage even through the interval, and for two and three quarter hours leaves it only momentarily. There are times when she makes the boundaries of life and theatre blur and one almost believes she is, indeed, Professor Wolff.

And thus does Stevenson and her moveable feast of fellow cast members deliver a breathtaking gift of theatre and a wealth of grist for the wheels of thought.