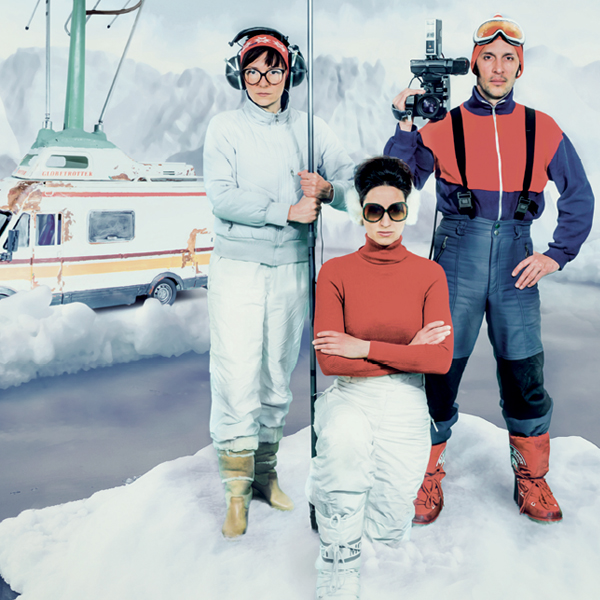 It might start with tiny trees in a miniature snowscape but Dimanche erupts and evolves and leaps and blows into gargantuan proportions. It is a supremely ambitious piece of both black theatre and what the company has called “gestural” theatre and what we may describe as multimedia physical theatre. In other words, it is hard to define.

Thematically it is a commentary on climate change. In this context it is terrifying and heartbreaking. It gives and it takes away. It delivers joy and amusement in cameos and then whisks the rug from under them, shattering the mood with fearful consequences.

It presents the most superb polar bear ever to hit a theatre stage. Oh, what a soft and huge and adorable thing it is with its cheeky wee cub tumbling about. But they both are imperilled by the melting polar ice. Just as the scuba diver, so comical with the cumbersome oxygen tank, faces an oceanic cataclysm. On land, there are catastrophic storms. The theatre shudders with thunder and the cracks of lightning. The wind howls and whines and wails and screams.

There are three characters, actor/puppeteers. In the darkness, other shadowy puppeteers are controlling the marvels and miracles and seamless transitions of this Belgian-based company.

There is a thread of our ever-present modern media, a camera crew valiantly trying to cover disasters. They are funny and very human.

There is the family living with the extremes of climate change. One minute the world is meltingly hot in their urban dwelling.  They are limp with heat but quick to care for their dear old granny, touching, wordless, love against the environmental odds. The next, they must fight the cyclonic winds. The performers do so brilliantly and one truly believes there is a gale on stage. Buster Keaton could not have done better in battling the savage wind.

This production won awards when it began as a short experiment at Edinburgh Fringe and comes to us now extended and complete, as a major work of Festival calibre.

It is a family show for ages nine and up and it is rich in potent, unforgettable imagery. While its narrative line may meander, its visual splendour just keeps on astounding with sounds and visions which sear into mind’s eye - forever.