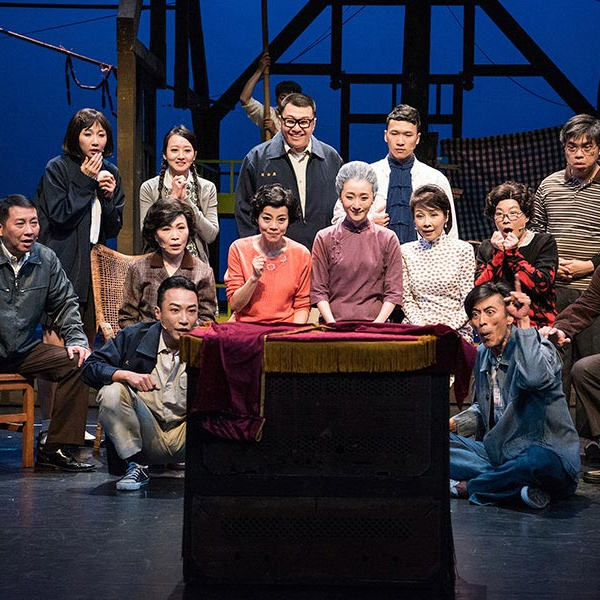 Breathtaking in its scale, this mighty Taiwanese production is one of the cornerstones of the OzAsia Festival. Once again, one cannot help but marvel at the cultural richness this festival brings to town or to celebrate the sight of theatres bursting at the seams with our Asian community.

Playwright and director Stan Lai is a superstar of Chinese-language theatre and this production from the Performance Workshop shines a light on just why this is so. In The Village, he has taken a broad brush to paint the history of Taiwan, not only the politics of post Kuomintang defeat but the lives in exile of Chiang Kai-Shek’s people in Formosa, which became Taiwan. Stan Lai depicts three culturally diverse exiled families in what was to become the village of Chiayi. They speak different tongues and eat different foods but, as time goes by, customs become shared and a new sense of community is established.  As years go by, new generations and different values emerge until, after 50 years, the family members have become part of a diaspora and the little village just a relic of the past.

The village set sprawls across the Festival Theatre stage, the once-temporary nature of the three houses suggested by a skeletal structural framework, domestica existing on raised floors with interior furnishings changing over the generations. From time to time the whole structure swings on the revolve to give a different perspective. And, there are countless peripheral scenes played out here and there with a sequence of narrators’ spotlit to one side keeping the families and their time frames in context.  Two large subtitle screens flank the stage.

It is quite a tall order to keep track of both the action onstage and the translated dialogue and occasional timelines.

Technically, it is a thrilling production. Sound and lighting are absolutely top notch. The musical score is interesting, a lot of it western pop as time goes on. The style of acting at first takes a spirit of traditional Chinese opera, voices raised, lots of overacting and comic ham. As time goes on, the cast members adapt the style to the evolving periods until they develop a sleek dramatic universality which depicts the present.

The three-hour epic deals with family and human issues which are common to us all:  life, death, loss, humiliation, kindness, snobbery and good food. We come to know and love the family members and to grieve for many of their predicaments. We share laughter at foibles and particularly at the graffiti on their public loo. It is a very big picture full of small details.

The cast is immense by modern theatre standards, many of them segueing from character to character to expand the sense of population and generational dynamics. There are standout performances, Hsiao Ai heartbreakingly among them as Ruyun and Liu Liang-Tso heroically so as General Wu. Also strong and pleasing are Chu Chung-Heng, Teng Chen-Huei, Feng Yi-Kang, Sung Shao-Ching and Ling Li-Ching.  And then there is Liang Hao-Lan, so elegant in her stately gait as Granny Lu.  Many more stand out in the intergenerational swings and roundabouts of this theatrical thrill.

Bravo OzAsia! And, thanks.