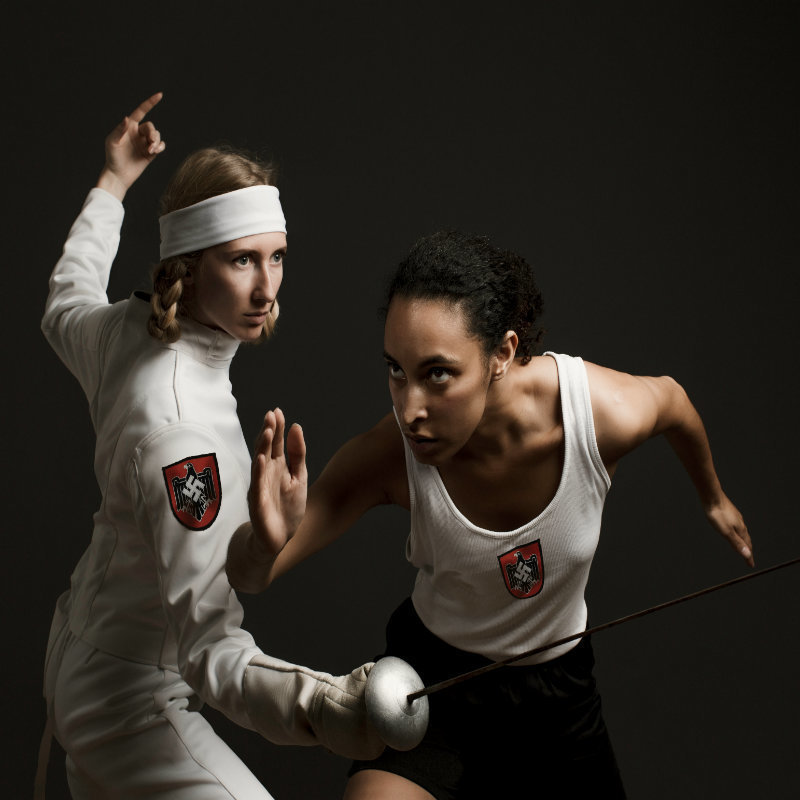 Games, written by award-winning Henry Naylor and superbly directed by Louise Skaaning, is based on a true story set in Nazi Germany. The story is about two talented athletes who both have Jewish heritage and both want to compete at the 1936 Berlin Olympics, but only one gets the chance. Gretel Bergmann, played by Tessie Orange-Turner, is a world class high jumper but is ultimately refused the chance to compete for specious reasons, but her ‘filthy’ Jewishness is the real problem. Helene Mayer (Sophie Shad) only has one Jewish parent and is a world champion fencer. The Nazis want her to compete in the games for a range of face-saving reasons. Bergmann and Mayer are known to each other and when Mayer wins a medal she gives a Nazi salute which offends Bergmann to her very core.

Although the play is solidly about the plight of the Jews during World War II, it is also about the insidious practice of labelling people and imputing particular qualities and characteristics to every member of the entire group.

Mayer is steadfast in refusing to be labelled a Jew – she is an athlete before she is anything else. Perhaps deep down she knows that acknowledging her Jewish heritage would ultimately be her downfall. Bergmann is the opposite: she is fiercely proud of who she is and refuses to accept that Jewishness totally defines her.

Orange-Turner and Shad both deliver compelling performances when they expound these polar opposite viewpoints, and there are others. With no hand props, both word-paint vivid pictures of their athletic prowess: one can almost see Mayer thrusting her foil at an unseen opponent, and Bergmann exploding out of the blocks and hurtling herself high over a bar above the Ayrans.

Orange-Turner and Shad have stunning vocal production – their articulation is copy-book and not a word is lost. This is a wordy play, and Naylor’s text is exquisite. Skaaning has the two actors fully utilising the black and red draped bare stage (save for two wooden boxes), and the audience sees exactly what Skaaning wants us to see: stadiums, Zeppelins, Berlin, baying crowds. The lighting is empathetic, and a gentle smoke haze adds to it all.

This is compelling theatre. It is highly recommended.