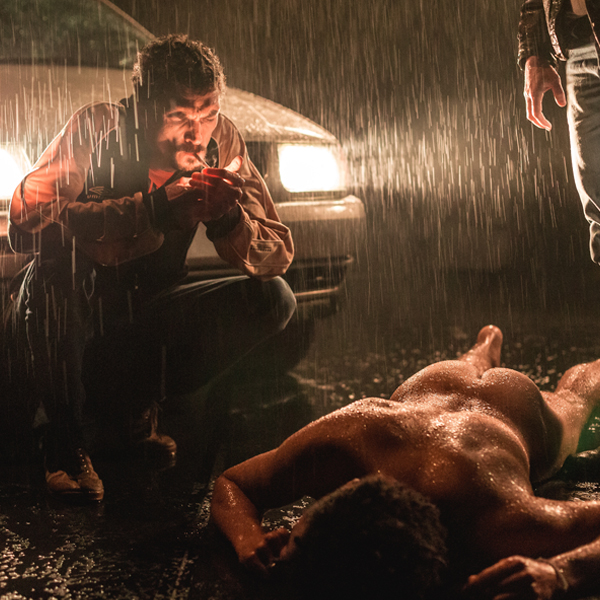 Theatre is artifice. So one may have thought before Milo Rau. This extraordinary revolutionary director seeks to portray reality through that very artifice. What he achieves is a heart-stoppingly dramatic experience.

La Reprise is about a murder, the lethal bashing and torture of a young homosexual man called Ihsane Jarfi in Liege, Belgium. It is a true story.

Rau prefaces the production with a wonderful Egyptian-born actor, Sabri Saad El Hamus, talking about the craft of acting and the way that only theatre can give a voice to the dead. Thus from beyond the grave, but through the actors, comes Ihsane's story, not in his own voice but in that of those who were around him: his parents, his lover, his friend.  And, the ensuing issue is whether truth and reality are ever quite the same.

Rau marries the reality of live acting with the simultaneous separate reality of video delivery. Both are profoundly immediate for the audience, the close-up video having big screen pores-and-all intimacy.

The actors are introduced in the form of an audition for the play. They do not come as sleek drama school products but as unemployed Liege locals. They speak in French or Flemish with surtitles beneath the video.  Their interviews reveal their backgrounds. It is artfully static, the actors sitting and playing to camera, the nuances of expressions magnified on the screen. There’s Suzy the 67-year-old retiree who has done a spot of acting. There is multi-racial Tom who is always colour-cast and who can bluff that he also is multi-lingual. This trick is the comic turn of the production as he incorporates local references. There is Fabian, a former factory worker and forklift driver, a man usually cast as a villain "because of my face". There are also Sebastien and Kristen. The roles take them from interviewers to characters as the play unfolds in five chapters, each one titled and introduced formally onscreen. Thus do Suzy and Sabri become parents of the murdered boy, depicted at home in bed or interviewed on TV, naked, stripped to raw emotion. There are interwoven references to the actors’ auditions as reality and artifice play together.

How did the victim end up in the hands of the murderers? The audience finds out, piece by piece until an almost unbearably graphic denouement. The perfection of the theatrical depiction of the cruel joyriders is so intense that in their engrossment, audience members may lose a sense of their own reality; just being swept into the space Rau has created. Masterful is an understatement for this level of theatrical intensity. And, it is not comfortable.

La Reprise means “the repeat” and this is the action of the play, dissecting and re-enacting the world and characters involved in the victim’s life, until he lies naked and brutalised in the rain. This is Rau’s gut-wrenching “banality of death”.

It is an exceptional theatre work which explains the raging international reputation of the Swiss director. It is the first production to express his 10-point “Ghent Manifesto” rules which “aim not to depict the real, but to make the representation itself real”.

La Reprise succeeds in this.

It is a brilliant, gruelling, disturbing work.  It is the stuff of which good Festivals are made.