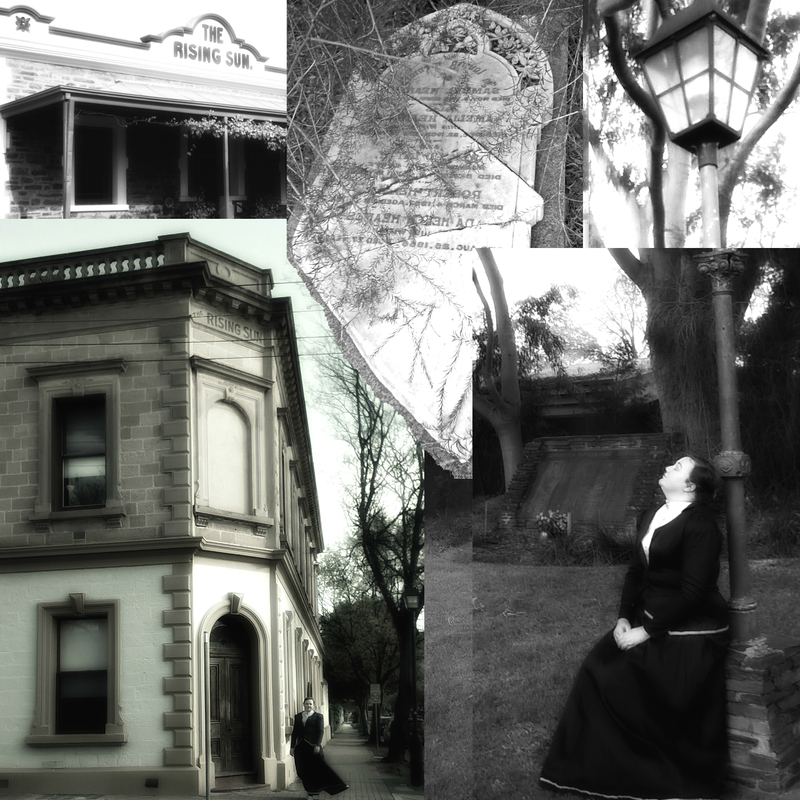 Charlotte appears across the lawns of MacKillop Park. She is of imposing proportions and attired in a strange period costume, a see through skirt showing legs in white bloomers from the front and a copious bustle behind. She opens a large book with bold hand-written contents and proceeds to read. Her voice wavers. She is clearly nervous. There is a considerable crowd around her; history lovers lured by the promise of strange creepy tales of yore.

Charlotte begins with Mary MacKillop, Australia’s first saint.  She gives an abridged account of Mary and the Josephites, identifying herself as one whose life had been spring-boarded by her time in the Josephite Women’s refuge. Thence, she went into service and ended up marrying her master and rising in social standing, living here, in the “village” of Kensington. And thus, sustaining this character with a decidedly posh voice, she leads the group from point to point around the streets of historic Kensington.

From a script devised by Oily Rag’s Shannon Norfolk, she reads of the stench of tanneries and the sound of horse carriages. In 1879, the first horse tram left from Regent Street and took an hour to get to the city.  The walking audience gathers around on the footpath, looking and imagining. There weren’t too many murders along the route but there were many tragedies. One was, amazingly, the local trapeze artist and acrobat who held regular performances for the neighbourhood but met with a strange ending. Then there were the publicans and their tales. People died early.

Charlotte places her audience, which on opening night included a small white dog, under the old original street lamp which towers preserved in Pioneer Park. She tells about the local doctors and the typhoid outbreaks from the creek. There’s an interesting scientific history in this neck of the woods, it turns out. And, who knew there was a “suicide corner” let alone why and how?  But that’s enough of tantalising spoilers. The commentary is extensive and very well researched. Perhaps because of poor night-time light, nerves, or lack of rehearsal, some bits of narrative were a bit ragged on the opening night’s walk. One rather wished the performer, Heather Crawford, knew the material more intimately. But her voice is loud and clear and as the first night wore on, she relaxed into her role and engaged a little with members of the audience, always keeping the spirit of anachronism as tidy as possible.

This show is a brilliant idea and it was a hit before it opened. It only takes 20 odd walkers per night and most nights already are a sell-out. One imagines Oily Rag will develop the theme and just get better and better. It’s onto a good thing.