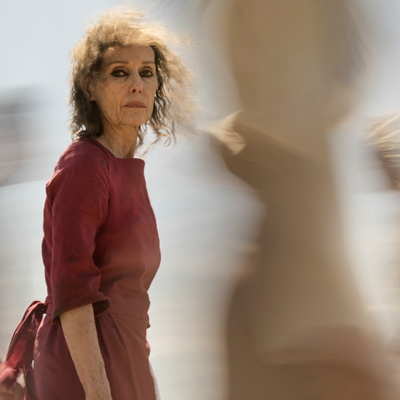 There aren’t enough superlatives with which to crown this Adelaide Festival production.

It creates for its audience one of those lifetime experiences, all at once beautiful, transcending, sensual, original and relevant.

It is epic in its scale in every way. Never have so many bare feet padded quietly across the Playhouse stage, a stream of humanity, an ebb and flow of bodies and voices over a theatrical grassland. Aloft, an orchestra and soloists deliver music, dramatic, ethereal, effervescent, and ethnic. Joycelyn Pook’s composition complements, heart and soul, one of the great epic sagas of history, Homer’s Iliad as reinterpreted by English poet Alice Oswald. And, her considered words are delivered with consummate expertise by illustrious Australian actress, Helen Morse.

All this comes from Adelaide’s Brink Theatre under direction of the peerless Chris Drummond.

Two hundred and fifteen people, old and young, lanky and portly, straight and stooped, tall and tiny, even a babe in arms, are onstage for Memorial. They are The Soldier Chorus. They represent the number of soldiers named in Memorial and they represent the human worlds from which all soldiers come; families and friends and communities.

Drummond has contrived this production exquisitely, his huge chorus dressed in understated street garb, not so much choreographed as designed in their placements upon the stage, their fluid movements, their pace, their circuits and crossings, ever with passive arms, has been beautifully coached by Yaron Lifschitz. Their voices at first seem incidental but as the saga evolves, their choral presence grows until a mighty roaring climax.

All the time, gracefully in their midst, her slim presence defined by a burgundy patchwork sheath dress, is Morse. And she brings that splendid voice of the theatre. It is a voice so perfectly modulated. She is never shrill. She is strong. She is subtle and passionate and every word arrives clear and entire to convey utter understanding. She lifts forth the beauty of Oswald’s poetry to linger in mind’s eye. She lists, exhaustively, the names of the soldiers, so many of them hard to pronounce, and yet enunciated clearly, potently, each one a tribute to a life, to an identity. One could not imagine a more difficult script for an actor to master and one can only be in awe of Morse for her embodiment of it all; her voice, with and without the music, rising and falling with the love and death dramas of the Iliad.

In one passage, from the rivers of people swarming around her, a bowl is carried respectfully across the stage and proffered to her; a merciful sip of water to lubricate that wonderful voice. In itself, this is a gracious and elegant piece of theatre.

Then there are the singing voices coming from the great orchestral shelf above the stage: counter tenor, Jonathan Peter Kenny, who is also the musical director; sopranos Kelly McCusker and Siobhan Owen; mezzo Melanie Pepperheim; plus Macedonian and Bulgarian singers, Tanja Tzarovska and Belinda Sykes.

The orchestra segues between the cultural references from soulful reflection to pulsing folksy exuberance. The music is simply exquisite and one hopes there will be a recorded soundtrack somewhere.

Also important in the realisation of this magnificence of theatre is the technical artistry of Jane Rossetto’s sound and Nigel Levings’s mighty lighting. All this professionalism and intelligence, this phenomenal massing of humanity for this iteration of significant war history recalled in the honour of the centenary of Armistice, is embraced under our South Australian Brink banner.

This is what Festivals are all about.