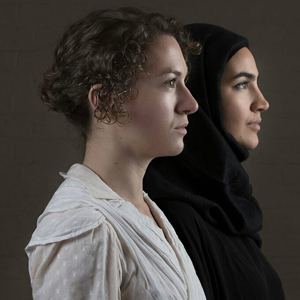 It is a brave comparison by playwright Henry Naylor of a British woman of the colonial Fishing Fleet, one of those who have sailed to the east in search of a husband, alongside the modern British Muslim woman who has flown to Afghanistan as a soldier bride.

The Victorian woman is in crisp white crinolines; the modern jihadi is in black chador and hijab.

Black and white and past and present converge very neatly as this exquisitely-written work develops.

Dark complexioned and fair, both women are very modestly attired. Both seek and find war-waging husbands. Both are shocked by the reality of those men and the conflicts to which they are committed.

Both are victims of a patriarchal society and both have cause to wonder that from the tiny seeds of males they can produce males and be destroyed by males.

So it goes, the ultimate equaliser against the sands of time and culture.

Naylor's script is utterly elegant both in his turns of phrase and the sophistication of his thoughts.

He writes of women "sharpening each other’s indignation", the "sieve of static" on the long-distance phone, the "grunting and truffling in the marital bedroom"...

The young English actresses Felicity Houlbrook and Filipa Braganca are absolutely up to the mark in delivering the language, both with beautifully modulated voices and exquisite enunciation.  They work side-by-side on the stage, their streams of dialogue intersecting as their stories are explored. Each compels with a gamut of emotions.

It is enlightening, frank, balanced, and terrifyingly relevant. It is a five-star must-see of Fringe 2016.