The Aspirations of Daise Morrow 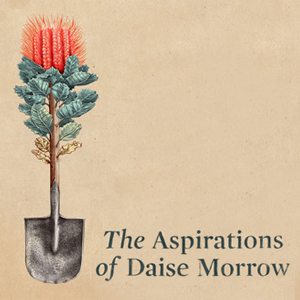 A musty scent of earth and grass pervades the theatre. The roof is a canopy, close like a lowering sky lit by a ball of amber light. The stage is a small mound surrounded by circles of punishing wooden picnic chairs upon which the audience must sit. Beneath the feet, the lawn is summer-bleached and strewn with eucalyptus leaves. Tiny flies, gnats, come with the territory. They visit the audience members, landing on hands, programs, and foreheads while generating small outbreaks of "the Australian wave".

Enter the actors. They might be costumed like figures from a Russell Drysdale landscape, but they speak the spirit of Patrick White.  It is as if, in adaptation, Chris Drummond has, like a literary alchemist, distilled the essence of White.

The original short story had the prosaic title of Down at the Dump. In renaming the story for the stage, Drummond has extracted the focal character with a melancholy twist. Daise is dead. The audience members attend her funeral. She lives among them. She is put to rest. She rises as a ghost of memories in her community. Her life was not complete. Aspirations are not just aims; they are breath.

It's about love and loss, about small minds in a big landscape and it is set in an insular Australian yesterday which we may now identify as an era when the country's cultural forces were at the height of idiomatic self-awareness.

The cast of four roams from character to character, not gender specific but divided by generations. Two great actors play the spans of suburban community seniors: the long-suffering wife, the plodding rustic man, the posturing local dignitary. Paul Blackwell dons shaggy dun brown overalls which make you itch to look at them and some rather odd old-fella makeup and uses artful demeanour as his primary tool of characterisation while from Kris McQuade arises that glorious gravel voice to ring forth a wonderment of White inflections and imagery.

James Smith and Lucy Lehman embody the experiences of growing up there in Sarsaparilla amid the secrets of the bush and the judgements of their elders. Lehman also represents Daise in her shades of approval from the tight little establishment of yesteryear while Smith elicits Ozzie, the symbol of the Aussie underdog. Oh, that young man can act. He is something special to watch. And to hear. White's wondrous lines stream naturally from his character depictions.

And there is the mind music of White's words placing these characters so vividly in the White world: the "small pink tilted house"; "standing among carnations"; "brindled with crystal crimson";  "turned into the speckled bush"; "trees with grey blades"; "face closed up tightly like a fist".

There's a graveside association with the deceased and the recollection of eating a caramelised baked apple; so incidental yet piercingly intense. Ah, behold the power of Patrick White's minutiae.

The players clomp in leather shoes through the grassy scape while lighting designer Nigel Levings plays harsh Australian sunshine through the shades of day upon the vast canopy under which the audience sits in The Space; a large world narrowed so carefully by designer Michael Hankin. If ever there was an award-worthy design, this is it.

But there is more.

There is the Zephyr Quartet: Hilary Kleinig, Belinda Gehlert, Jason Thomas, and Emily Tulloch. They are seated at four points among the audience, sometimes plucking strings in sweet tuneful eloquence and at others, rolling forth the atmosphere of this timeless Australian yesterday. It is intimate, perfectly balanced, and of mellow tonal beauty, with shades of swirling Philip Glass; the music embraces and caresses the audience. It is the final touch to the complete experience, to a particularly brilliant evocation of Patrick White Australiana.

Following the superlative, award-winning litany of productions of his career so far, this lovely lull of Australiana cements the belief that Brink artistic director, Chris Drummond, is the genius theatre mind of our time.