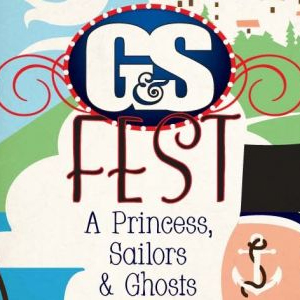 One may fairly safely bet than anything the Gilbert and Sullivan Society turns on is going to be of pretty high quality. The Society draws on some of the top up-and-coming talent in town as well as a stable of seasoned performers. They come from the Conservatorium, State Opera, and music teaching or if they don't, they have to seem as if they do.

Traditionally, the company has presented conventional proscenium stage costume productions with all the theatrical trimmings. Here in this triple bill over three consecutive nights, it has scaled things right back to a semi-staged version. One may throw away reservations that the lower production values would undermine the show.

On the Pinafore opening night, it was a matter of minutes before one had adjusted to the changed onstage arrangement; albeit the overture with the performance of a weird quasi-advertisement for genealogy services was extremely disconcerting, if not downright alienating. It was trying to say that people were descended from earlier people, even sea captains as in HMS Pinafore. But why?

Another mystery in this production is the use of theatrical smoke. The stage and part of the theatre are hazy with smoke and one finds oneself worrying about the musicians and singers working amidst it. Smoke is not a typical effect in Pinafore - and one would prefer the show went without it.

The rest of the production does not need it. It is good.

David Lampard has devised a clever partial set with a huge ship's wheel on a partial captain's bridge. This takes up about half the stage. The other half is occupied by a good, lively orchestra under the baton of musical director Rebecca Walker. A large sail sweeps across the back of the stage. That is it. As time goes by, male and female choruses occupy back areas of the stage and, downstage, the principals perform in costume.

One way or another, there are a lot of people onstage, which is typical of a G&S Society production. There are the briny sailors led by the jolly Boatswain, strongly played by the very engaging Ian Brown. Then there are the sisters and the cousins and the aunts who flank the foppish Sir Joseph Porter who has come to marry the captain's daughter. They dress the stage and the choral fun and games very nicely in the pithy old comic opera spirit of G&S.

Porter's pretentious love-hate character totters forth most eloquently and properly through the practised artistry of Nicolas Bishop, an ever-popular figure on the Adelaide stage.   The sopranos, Sarah Jane Pattichis as Josephine and Tahlia Ries as Little Buttercup, trill and please. Andrew Turner turns in a sterling performance as Ralph Rackstraw, the common sailor in love with the captain's daughter. But it is Andrew Crispe, as Captain Corcoran, who brings the house down in this production. He is possessed of exceptional physical grace along with witty inflection in a clear and lovely voice.

The rest of the cast sustains the standard. The chorus sounds as good as it looks and complements the action. The costumes are just a bit odd, but the spirit is strong and the talent abundant and nicely directed by Peter Hopkins.

All of which just underscores how lucky we are to have our splendid G&S Society regularly and solidly presenting fine musical fare.